While flyers of the Sopwith Camel are credited in aggregate with the most victories associated with one aircraft design, the later arriving SE-5a (Scout Experimental 5, model A) of the Royal Aircraft Factory is considered by most experts, including our friend the late Javier Arango, to be a superior—certainly vastly more stable—fighter plane. Some of the greatest British ace of the war flew the aircraft and compile huge victory totals late in the war. Here are three legendary aces who flew the SE-5a. 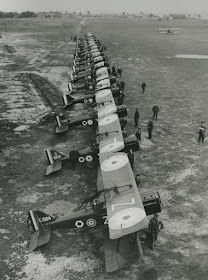