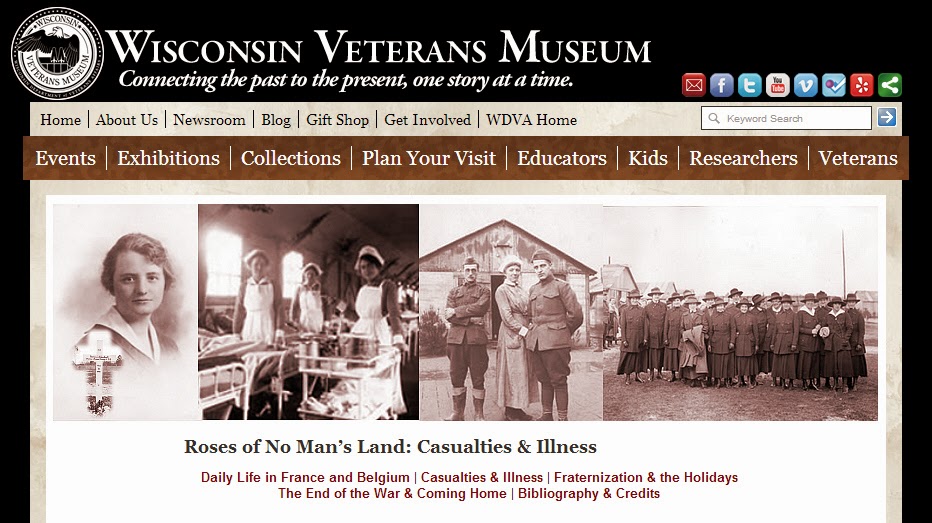 A few samples here from the museum's outstanding exhibit and website —

“None complain of the hardships they have been thru and all are anxious to be back on the firing line again.”
-Aimee O’Keefe Kinney in a letter to her sister, 19 September 1918.

Injuries to the arms and lower leg were among the least severe cases. The First World War saw some of the worst wounds imaginable. In particular, artillery and gas caused horrendous damage to soldier’s bodies, and often their minds. When a soldier was injured, first he would be given first aid and then removed from the front line. The soldier was then sent to the battalion aid post. At the battalion aid post, the casualties were given an anti-tetanus shot and a diagnosis tag and sent on to the nearest ambulance dressing station. At this location, first aid and shots were given to those who had not previously received such treatment, and the casualties were then transported to Evacuation Hospitals.

“Madison certainly must be a blue place now that they are notified of the mortalities. We all sympathize with them but the Lord knows we are doing all there is…The most pathetic thing I hurry against is when the boys wake up from ether and find that an arm or leg has been amputated, but like soldiers they bear it bravely.”
- Helen Bulovsky in a letter to her parents, 16–18 October 1918.

Aimee O'Keefe, just before her trip home and discharge, 6 April 1919. Most units returned in March, April, and May of 1919. Aimee O’Keefe’s case a typical example. O’Keefe set sail on 13 April, arrived at Hoboken on 23 April, was discharged and allowed to proceed home on 29 April, and formally discharged and issued her final paycheck and bonus on 1 June.

Aimee O’Keefe married Robert Kinney a year later. They had six children together. Aimee O’Keefe Kinney became the commander of the Otis H. King American Legion Post in Hudson, Wisconsin, in 1936. She was the first woman to become a post commander in this state and later became a county commander.

Or, better yet, when you are in Wisconsin visit the museum at: