Just Where Did Those "Soccer Balls of the Somme" Get Kicked?

Last Saturday after morning chores and a shopping run to Trader Joe's, I decided to dedicate the afternoon to some detailed planning for my Somme battlefield tour this summer.  One of the activities I plan for our group is to visit the site where Capt. Billie Nevill's men of Company B of the 8th Battalion of the 2nd East Surrey Regiment kicked those four soccer balls across no-man's-land on 1 July 1916.

I hope our readers are familiar with the story—it's one of those glorious tragedies of the monumental, never-to-be-forgotten story of the First Day on the Somme. To reassure and, probably, to distract attention from the grim prospects of the coming battle—the unit was part of the 18th Division's assault on Montauban—Nevill purchased four soccer balls and promised rewards for the first man to kick one of them into a German trench. It began as intended, but like a lot of British units that morning, the East Surreys got hung up on the enemy's barbed wire. The good captain was killed along with 446 men of the East Surrey's. Two footballs were subsequently recovered, one held in Dover Castle (Princess of Wales's Royal Regiment & Queen's Regiment Museum).

Anyway, back to my recent quest, a job I thought was going to take me ten minutes consumed the entire afternoon.  I checked over a dozen Battle of the Somme maps, every Somme-related book on my shelves, and, of course, anything I could turn up online.  The problem was that no one source had a map with an arrow that said, "This is where it happened." My hours of research had generated a long list of clues, some of which were contradictory.  By triangulation and guesswork the sectional map and Google aerial view below show my results.  I open this to comment and correction from our readers, but absent any definitive correction, this is where I'm taking my group. 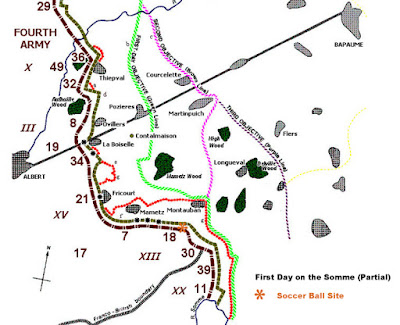 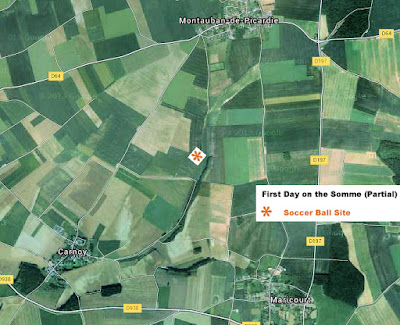