Ten Almost Random Thoughts on the 100th Anniversary of the Battle of the Somme, Part II


One Hundred Years Ago Today, the Final 140 Days of the Somme Began

6. One mystery about the Somme that I've never seen satisfactorily explained is how the German Army, which had minimal casualties on 1 July, managed to catch up to the grand total for the British Army over the next 140 days. They started out with all the advantageous positions, and they knew the Allies' intentions — didn't the machine gun and massed artillery give the defenders a decisive advantage? Everywhere else they did.


7.  The Pals Battalions and, in general, the commitment of the under-trained New Army divisions are part of the tragic dimension of the Somme and elements of its compelling mythic heritage with its soccer balls, the Leaning Virgin, sacred trees, and countless memorials and cemeteries of varied design. The near-annihilation of the experienced 29th Division (eight months continual combat at Gallipoli) in trying to capture the mine site on Hawthorne Ridge and Y-Ravine, however, shows that there were more fundamental flaws in the initial concept that the inexperience of the troops.


8.  The poor bloody infantry suffered the most, of course. But the failure of the campaign was due to the poor performance of the artillery. To begin with, the Royal Artillery simply lacked enough guns, especially larger pieces. None of their major missions — cutting the wire, destroying trenches and redoubts, supporting the advancing infantry, and suppressing enemy artillery — were accomplished to an acceptable level.  Plus, they suffered a high number of duds, many of which came from American suppliers.

9.  The Somme is the Great War's most remembered battle (at least in the English-speaking world). For instance, the U.S. Library of Congress catalog has 289 citations for the "Battle of the Somme" and 161 entries combined for the three biggest American battles of the war, the  2nd  Marne, St. Mihiel, and the Meuse-Argonne Offensive. I'm sure the ratio would be much greater in, say, the British Library. Why the Somme fascination? Some speculations:

a.  It was almost inhuman in scale. Beside the casualties, there is no better symbol of the Somme than the Lochnagar Mine Crater, fired on the first morning of the battle.

b.  Much of what we know about the Great War comes from British sources, and the Somme sent shock waves through the British Empire like no other event in history. It affected every level of their stratified society from the working class Pals of Accrington to the "playing fields of Eton." (Over 1,100 Etonians died on the battlefields.) It touched every corner of the empire — Canadians, Anzacs, South Africans, and even Indian Lancers, served and died at the Somme.


c. The Somme marks a literary fault line. The early war poets, like Rupert Brooke, John McRae, and Alan Seeger, wrote of tradition, duty, and sacrifice. Well, Seeger dutifully met his "Rendezvous with Death" at the Somme on 4 July 1916. About the same time, two junior officers of the 38th Welsh Division named Siegfried Sassoon and Robert Graves were approaching Mametz Wood, where their unit would encounter a brutal fight. They would help initiate what has become the more famous school of war writers, the rejectors of the past, who saw the war as futile and a great betrayal. Graves later wrote, "I found in Mametz Wood a certain cure for lust of blood" and aptly titled his war memoir Goodbye to All That.

After all that happened in 1916, what happened next truly must have seemed to have made the whole effort appear futile. The red area marks all the territory captured by British and French forces in the 1916 battle. The green line marks Operation Alberich, AKA, the retreat to the Hindenburg Line (9 Feb – 20 Mar,1917). The Allies were "gifted" with three times the territory they had bled barrels for, and the German's were manning a shorter and much more defensible front line. 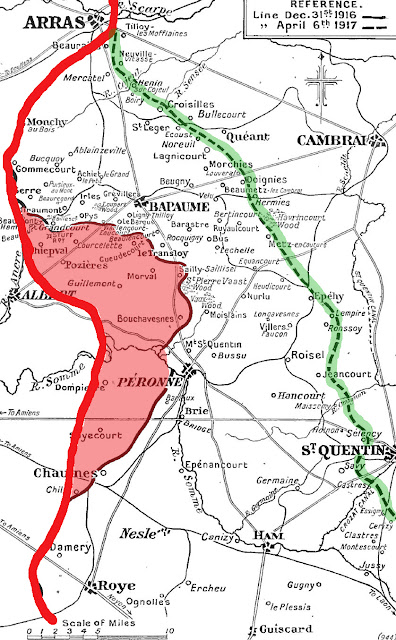 Just enter "Somme 1916" in the search box at the top of the screen and you will find two dozen articles we have presented earlier on the battle.