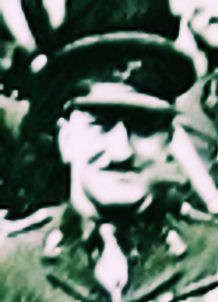 An aristocrat, who was both brilliant and a brave officer, Sir Edward Beddington-Behrens (1897–1968) served in both World Wars. In 1915, he was commissioned into the Royal Field Artillery, subsequently receiving the Military Cross in 1917, with bar added in 1918.

His twin brother, 2nd Lt. Walter Louis Behrens, Royal Field Artillery, was killed in action in 1917. After the war, Sir Edward studied at Christ Church, Oxford, and took a PhD in economics at the University of London, before becoming one of the British representatives at the League of Nations. In 1932 he published "A Practical Monetary Policy" for the Ottawa Conference. He became an early advocate for European unification.  In his spare time he was a notable patron of the arts.

When World War II broke out, Beddington-Behrens was called up from the Territorial Army, serving in Belgium prior to Dunkirk and later as a staff officer at Coleshill House, where British resistance fighters were prepared in case the nation was invaded.

In the Great War — like so many of his generation — he saw his first service in the Battle of the Somme. Late in his life the debate started up as to whether the Somme was a disaster or part of the necessary learning curve by which the BEF weakened the Germany Army. Beddington-Behrens would have none of it. He wrote this letter to the Times in response to some article that had caught his attention. 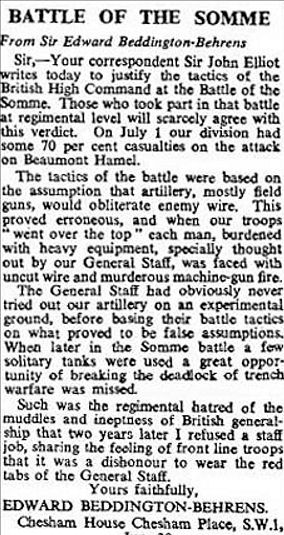