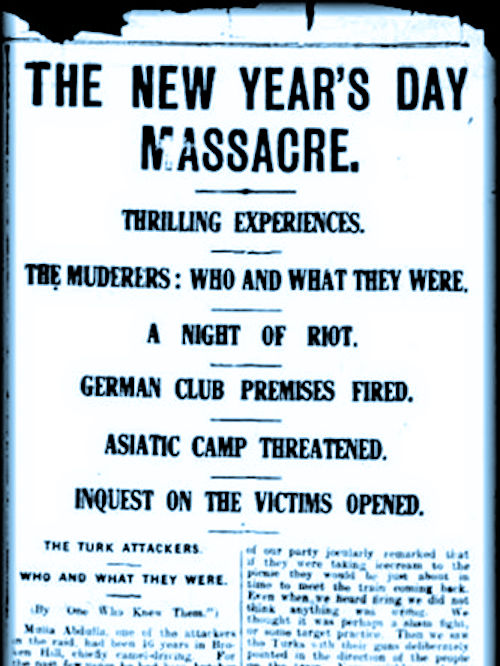 Presented at the Western Front Association Website
Whilst the vast majority of First World War actions took place in France and Belgium, there were other theatres of war in which British and Commonwealth soldiers and sailors fought. These so called ‘side shows’ in obscure theatres of war took place in many different countries, from Turkey (the Gallipoli Campaign) to off the coast of Chile (the Battle of Coronel), from Ireland to East Africa. But the ‘battle’ that took place on New Year’s Day 1915 in Broken Hill, New South Wales, Australia was unexpected and the first (and possibly only) incident of the First World War involving Australian civilians. This attack, which would probably be described as a terrorist incident today, was linked to Britain’s (and by extension Australia’s) declaration of war on Turkey which occurred on 5 November 1914.
As Dr Peter Stanley has written in a BBC History Article:
With the outbreak of war the new Commonwealth of Australia found itself willingly at war for the empire. Australian leaders were not consulted, but demonstrated their unqualified loyalty. Andrew Fisher, Labour prime minister from 1914 to 1916, declared that Australia would support Britain to "the last man and the last shilling.
Australia had declared war on Germany, alongside Britain, on 4 August 1914, and had not been involved action other than the occupation of German New Guinea which resulted in no more than six fatalities (these are buried at Rabaul (Bita Paka) War Cemetery). The only other incident which caused an early loss of life to Australians in 1914 was the sinking of her first submarine, the AE1 which was lost with all hands on 14 September 1914. The 35 men who were drowned in this accident are commemorated on the Plymouth Naval Memorial.
1 January 1915 was a holiday for the mining community of Broken Hill. It was the height of the southern summer and about 1,200 men, women, and children were looking forward to a picnic organized by the Manchester Unity Order of Oddfellows. They were to take a train the 15 or so miles from Broken Hill towards Silverton. Unbeknown to the miners and their families, two men had, for varying reasons, prepared an ambush.
Gool Mohammed, an Afghan cameleer who had fallen out of work and who now sold ice-cream in Broken Hill and Mullah Abullah (another Afghan who was the butcher for the local camel-drivers) were laying in wait. . .
Read the Whole Article Here:
https://www.westernfrontassociation.com/world-war-i-articles/new-years-day-1915-the-unknown-battle-of-broken-hill/