The Story Behind a Famous British Recruiting Poster

There's a good reason why this Tommy showed a happy-go-lucky attitude. 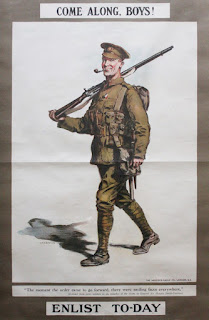 Recruiting poster after W H Caffyn, published by Parliamentary Recruiting Committee, as Poster No 22, printed by Haycock-Cadle Company, 1915. This poster depicts a marching British soldier smoking a pipe and is captioned: "The moment the order came to go forward, there were smiling faces everywhere. (Extract from letter written in the trenches of the Aisne by General Sir Horace Smith-Dorrien).” By the end of 1915 the number of new recruits was falling. Stories of the horrors soldiers were facing discouraged men from enlisting. Recruiters therefore made a last effort to avoid instituting conscription. Posters like this attempted to put a positive spin on life at the front. The demand was still not met, and the Military Services Act was passed in January 1916 to introduce conscription. Associated with World War One, Home Front (1914–1918).