The Trench of Death at Diksmuide

On Belgian section of the Western Front at the southern end of the vast inundated area between Nieuport and Diksmuide that secured the northern-most portion of the front for the Allies was a critical series of field fortifications known as "The Trench of Death." Between 1914 and 1918, regiment after regiment of the Belgian Army struggled under unbearably harsh conditions to prevent the German advance into France. This was a point of extreme vulnerability; a penetration at this location would enable the German Army to outflank the Ypres salient and perhaps roll up the entire Allied position in the west. By the end of 1914 the Germans had established a strong redoubt along the river.

In 1915, under heavy fire, Belgian engineers had started digging trenches along the west bank of the Yser River to try to retake the base. Through the use of saps (the extension of a trench to a point below the enemy fortifications) both sides got closer to each other until they were yards apart. The attacks were incessant, the trenches narrow, the soldiers sitting ducks for mortar attacks. Finally, in 1917 the Belgians built a big concrete shelters with lookout holes called the "Mouse Traps" to stop the Germans from infiltrating the Belgian trenches at the ends of the saps. 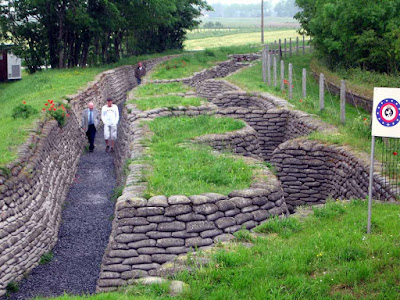 Life was rigorous in the trenches. Belgian soldiers manned the trenches for three days straight, then got three days rest in a cantonment in the rear combat zone. The Trench of Death near Diksmuide remained the heart of the Belgian resistance until the successful Anglo-Belgian offensive called the Battle of Flanders began on 28 September 1918. Today the Trench of Death can be visited and is among the more impressive memorials on the Western Front.