Machine Gun Lessons from the Somme 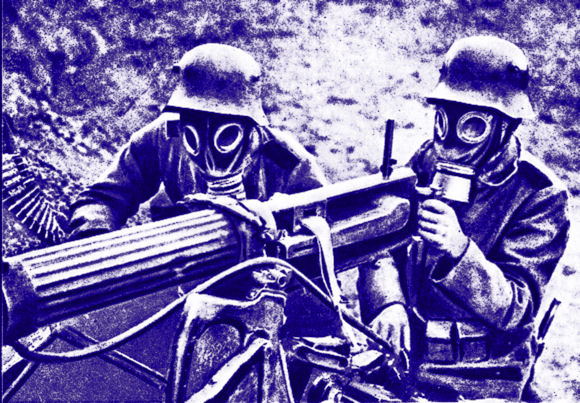 Despite heavy reinforcement, the 1st and 2nd German Armies at the Somme continued to suffer from a shortage of artillery and munitions throughout the 1916 battle. Consequently, with limited artillery support, German infantry at the Somme was often left to its own devices for defense. Hand grenades, once a specialist weapon, were used extensively to aid in  defense, as were a growing range of small-caliber mortars. Both types of weapons gave the infantry some much-needed close support.

However, it was the machine gun that really provided the fire support so required by the defending infantry. "Lessons-learned" reports recognized the centrality of the machine gun to the success of the defense on the Somme. The 1st Battalion, Reserve Infantry Regiment 28 wrote: “The infantry battle was always supported by our machine guns. As long as the machine guns and their crews were intact, every English attack was bound to be beaten back.”

As machine guns became more and more important, German units quickly found that they could never have enough of these. Most regiments had an establishment of 15 machine guns at the beginning of the battle. The 1st Army was successful in finding enough guns to bring this up to 25 or 30 over the course of the battle.

Prior to the battle, German defensive doctrine maintained that machine guns should be employed in the forward-most trench. However, the battle showed that guns deployed forward would quickly be destroyed. Instead, units deployed their machine guns in depth in shell holes with instructions to fire only at the last minute to avoid being spotted by enemy aircraft. The 183rd Infantry Division wrote:“Single machine guns deployed outside of trenches proved themselves to be especially  worthwhile in the battle, since they were not discovered by enemy artillery, which concentrated mainly on the trenches. Repeatedly, enemy breakthrough attempts were brought to a halt by machine guns deployed like this.”

The battle showed once again the importance of flanking gunfire, which had a great moral effect on the enemy and helped keep guns hidden. Indeed, some units even took to using a barrage of fire from machine guns firing over the heads of the frontline infantry. Of course, the importance of machine guns was also recognized by the Entente, and every effort was made to put them out of service. Consequently, gun crews suffered high casualties. Based on previous experience, the machine gun company of Infantry Regiment 65 went into the line with more crews than needed and asked for additional infantrymen to be assigned as the battle wore on.

This company also recommended that once a gun fired, it should change position, as the enemy focused his artillery on German machine guns. Reports after report stressed the need for more men to be trained to use machine guns, both German and enemy, to take the place of the gun teams when they were wounded or killed. Consequently, one of the key recommendations to come out of the battle was that training on machine guns be extended to ordinary infantry men as well.

Indeed, the battle of the Somme proved once and for all that the days of a uniformly armed infantry were well and truly over. From this point on, infantry units would be armed with a wide array of weapons, from rifles to hand grenades to small mortars and to ever increasing numbers of machine guns.

Source: "Learning War’s Lessons: The German Army and the Battle of the Somme 1916," Robert T. Foley, University of Liverpool