Under Fire at Jutland 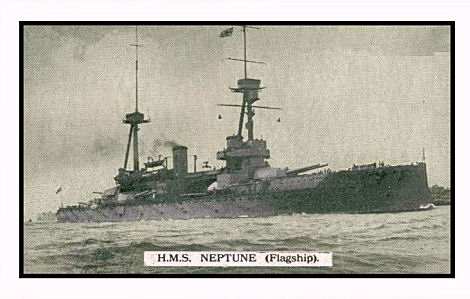 
My action station was in the control top, some 60 or 70 feet above the upper deck, access to which could be gained either by ascending an interminably long iron ladder running up the interior of the mast, or by climbing up outside the tripod by means of iron rungs riveted  on the struts. Experience of the difficulties of ascent had induced me some time ago to have made a blue jean bag, in whose capacious interior I always kept the thousand and one gadgets so essential for the proper and comfortable fighting of an action,  ear protectors, binoculars, a stop watch, a pistol, a camera, a respirator, sundry scarves, woolen helmet, and so forth. It was armed with this weighty 'battle-bag’ that I clambered up the starboard strut of the foremast, past the steam siren (which sizzled ominously as one approached it;  (it is an abominable experience to have a siren actually siren when you are near to it !), through a belt of hot acrid funnel smoke, and finally into the top through the "lubber’s" hole. . .

It is a curious sensation being under heavy fire at  a long range. The time of flight seems more like 30 minutes than the 30 or so seconds that it actually is.  A great rippling gush of flame breaks out from the enemy’s guns some miles away, and then follows a pause, during which one can reflect that somewhere in that great ‘no man’s land’ 2 or 3 tons of metal and explosive are hurtling towards one.

The mountainous splashes which announce the arrival of each successive  salvo rise simultaneously in bunches of four or five to  an immense height. One or two salvos fell short of  us early in the action, and the remainder, I suppose, must have gone over as I did not see them. The Hercules, four ships astern of us, had been straddled on deployment, a feat which had greatly impressed me with the capabilities of the German gunnery, but, with the exception of the Colossus, which received a 12-inch shell in the fore-superstructure and sundry small stuff  round about her fo’c’sle, no single battleship suffered any real damage from the German’s gunfire.

The  enemy, however, clearly received some punishment as two battle cruisers, which were rather closer than were their other ships, were engaged by us and by most ships of the rear squadron at one time or another, and we  saw at least two of our salvos hit, after which the two enemy battle cruisers dropped astern, to all appearances badly damaged. The warm, red glow of a ‘hit' is easily distinguishable from the flash of a salvo, and  is extremely pleasant to look upon.