[This was written by experienced soldier and mountaineer Richard Galli, who has spent much time pn the mountains of the former Italian Frong. MH]

Mountain Outpost in the Italian Alps, 1916


During the three-year war in the Austro-Italian Alps at least 60,000 soldiers died in avalanches. [This conservative statistic comes from the research of Heinz von Lichem, in his outstanding three-volume study Gebirgskrieg 1915–1918.] Ten thousand died from avalanches in the "lesser" ranges of the eastern half of the high front—the Carnic and Julian Alps. In the "high" Alps to the west, the Ortler and Adamello groups, the Dolomites, avalanches claimed 50,000 lives.

To put these casualties in perspective, a total of 25,000 troops were killed by poison gas on this war's Western Front in Belgium and France. Gas killed an additional 7,000 men on the Austro-Italian front, the greater part on the plains and plateaus along the Isonzo and Piave rivers. [Gas is not very effective in the cold windy atmosphere of mountains.] 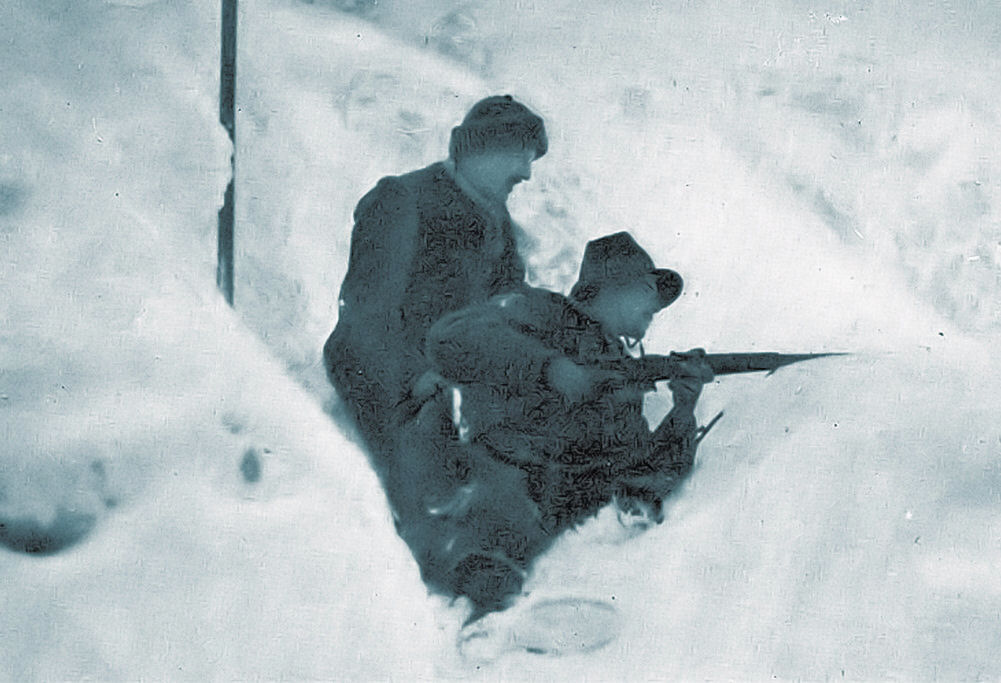 Italian Sniper Team in the Snow


Survival in the high Alps would entail applying a great many methods, from locating the barracks men lived in, to meticulous planning of routes taken on attack or patrol, to the careful consideration of snow and weather conditions. Roofs could be reinforced to survive minor slides, but the best safety came from burrowing under glacial ice or into mountain rock; or, incredibly, building on or below the steepest of slopes, where snow does not accumulate. Patrols could cross danger areas one man at a time, with 25-meter intervals and ropes, but larger units of Kaiserjäger or Alpini had less choice in tactical movements or during the attack. Two of the worst incidents of avalanche on the Alpine front occurred in 1916, when both armies were still adapting to mountain warfare and survival above the timberline. On 13 December catastrophe struck the Austrian barracks below the Gran Poz summit of Monte Marmolada. This encampment had rock cliffs to shield from direct fire, and was out of high-angle [mortar] range. But these defenses from human violence could not protect them from the mountain itself, despite the "city under the ice." Two hundred thousand tons [one million cubic meters] of snow and ice buried over 500 men. Only 40 bodies were recovered of the estimated 300 who perished. The snow did not cease. Wind and accumulation made the conditions critical, and on 17 December the nightmare began. During the next two days, avalanches would take the lives of 9,000 to 10,000 Italian and Austrian soldiers. Communication lines, fixed ropes, and climbing ladders were swept away, as were entire companies and batteries of men, guns, and mules. In spring their remains were found by the ravens.


The total statistics of avalanche and cold, these tens of thousands of casualties of alpine warfare must be considered in one more aspect—that they almost all took place in just two winters. Italy had not yet entered the war in the winter of 1914/1915 and the eastern Alps remained peaceful and quiet. It was the winters of 1915/1916 and 1916/1917 that saw the true extent of "death by nature." The beginning of winter in 1917 saw an almost total collapse of the eastern Alpine front, with the Italian Army's disastrous defeat at Caporetto in October, and the eventual retreat to the distant Piave River. To reinforce this line the Italians withdrew all their troops from the hard-earned terrain of the Dolomites and eastern sub-Alps, as well as rushing units from the northwestern front lines of the Ortler and Adamello ranges. With the momentum of the offensive, the Austrians followed suit. With the high mountains unmanned or abandoned, the casualties due to avalanche dropped considerably in the winter of 1917/1918. Cold would continue to take its toll in the desperate, winter long battles on Monte Grappa and the Altipiano. Prevention was ignored or impossible due to the critical situation at hand. What happened in these highlands was not a skilled battle of mountain troops; there was the slaughter so common to this entire war, events usually reserved for the short summer on this front. Mercifully, the Great War would end before the 1918/1919 winter, and on all fronts the killing and dying came to an end, including the trenches at 10,000 feet.