Messy Nessy Connects Absinthe, Wine, and World War I for Us 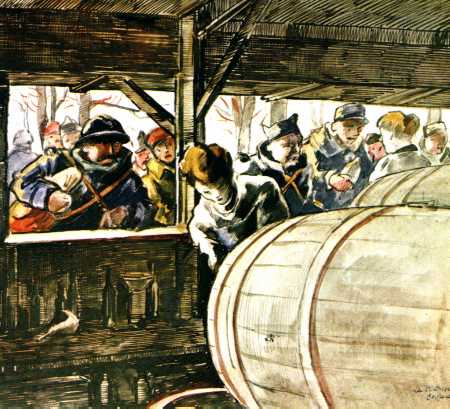 One of our favorite bloggers, Messy Nessy, an expert on all things French and Parisian,  occasionally ventures back in time to the First World War.  She shares some surprising insights on matters alcoholic in a recent posting.

In 1910, the French were drinking 36 million litres of absinthe per year.

Spurred by the temperance movement and, funnily enough, allied by the winemakers’ associations, absinthe began to be publicly associated with violent crimes and social disorder. Haunting posters depicted alcohol and even bartenders as the enemy. France banned absinthe altogether in 1915.

The rise of wine mirrored the rise of the working class, but it wasn’t until World War I that it truly became the French national drink as it is so commonly stereotyped today. 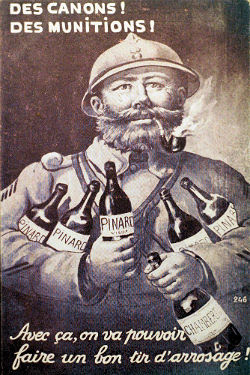 “Basically the soldiers went over the top pickled on pinard, the strong, low-quality wine which was supplied in bulk. Up until then the Normans, the Bretons, the people of Picardy and the north, they had never touched wine. But they learned in the trenches,” explains Denis Saverot, an editor of a wine review magazine speaking to the BBC in 2013 for an article ironically titled "Why Are the French Drinking Less Wine?"

“After that in France we generalized the consumption of cheap wine so that by the 1950s there were drinking outlets, cafes and bars, everywhere. Tiny villages would have five or six. But that was the high point.”

If you are looking for something uniquely different in your daily explorations, try the bubbly and refreshing Messy Nessy and her Cabinet of Chic Curiosities.

Tip of the hat to my Donna Gaye