An Awful Touch of War: The 27th New York Division at the Hindenburg Line


We've had our real touch of war and it has been awful.
Pvt. John Bowman, 108th Infantry, 27th Division


The painting above, by an official American war artist, accurately captures some important features of the assault in the Somme region on the strongest element of Germany's defensive Hindenburg Line over the last few days of September 1918.  Note that on the right side of the illustration the Doughboys are advancing up a slope toward the cover of the St. Quentin Canal Tunnel (see map below), the anchor of the German line. On the bottom, and to the left, however, the Yanks are facing the rear, fighting Germans who have popped up infiltrating their rear.  Also, in the distance can be seen a disabled tank.  Tanks were a dismal failure in this attack.

Two American divisions, the 27th New York National Guard and the 30th Tennessee/Carolina National Guard, attacked side-by-side in this operation. In this article we focus on the 27th Division because they had much the worst of it. Over four days the division would have 1,028 men killed and 3,614 wounded. The division did not come close to capturing their objectives for the assault, the villages of le Catelet and Gouy.  As rifle companies were decimated, troops of the Australian 3rd Division were rushed in to stabilize the faltering American lines. The official account below tells the tale as a matter of fact but is quite chilling in its details. I've inserted a few clarifications here and there.

The mission of the II Corps, in the general attack of 29 September was to secure the objective, Nauroy–Gouy. Upon reaching this line, the Australian Corps was to pass through the II Corps and continue the attack. [For this battle the Americans were placed under the command of Australian Gen. John Monash, considered to be one of the best commanders of the war.  However, they were under Monash's command for only a few days and had no time to absorb the systematic and highly orchestrated approach to offensive operations for which he is highly admired. The night before the offensive Monash was skeptical about the Yanks' chances for success.] 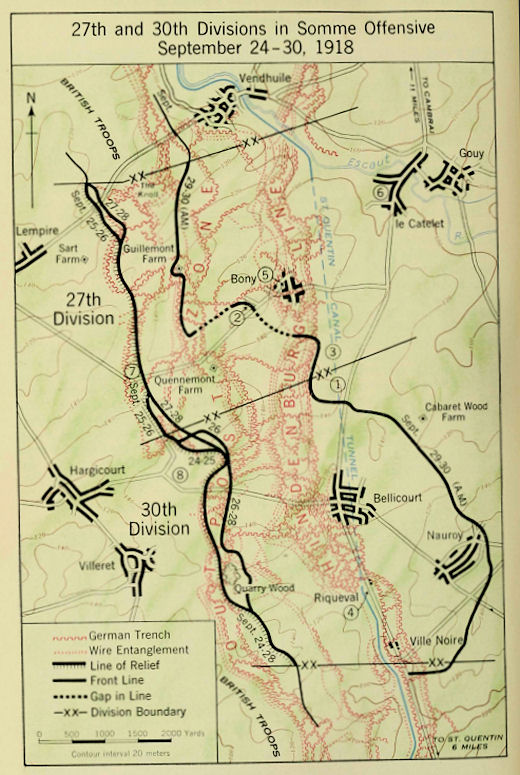 The 27th advanced against the Hindenburg Line in column of brigades with the 54th Infantry Brigade leading. The attack was launched at the designated hour, 5:30 a.m. Because of the failure of the British III Corps to secure the designated line of departure and the subsequent failure of the 106th's attack on 27 September, the infantry started its attack one kilometer in the rear of the rolling barrage, which permitted the enemy machine guns in the three main strong points of Guillement Ferme [farm], Quennemont Ferme, and the Knoll to maintain a heavy fire on the attacking forces from the opening of the attack. The mist, low clouds, and smoke from the barrage also interfered with observation and maintenance of direction. Tanks assigned to support the infantry suffered mechanical failure or were blown up in the wire by landmines or shellfire. Only one of the 39 tanks assigned to the attack made the advance to its initial objective. [Besides the usual punishing artillery and machine gun fire, special mortar and grenades teams using both hand-thrown and rifle-fired grenades, were particularly effective at breaking up the American attack.]

The resistance offered by the enemy strong points in Guillemont Ferme, Quennemont Ferme, and on the Knoll seriously impeded the progress of the 27th Division. [The village of Bony on a rise overlooking the battlefield was also a very strong defensive position.] On the 29th the 107th Infantry suffered the largest number of single-day casualties of any regiment in the U.S. Army in any conflict—1,062—of which 349 were listed as K.I.A.

The Australian units advanced to effect the passage of lines about 11 a.m. and, together with troops of the 27th Division, took Quennemont Ferme and continued until checked in the main enemy position south of Bony. The Knoll was taken in hard fighting and held against counterattacks. Guillemont Ferme was not taken. Troops of the 53rd Infantry Brigade, intended to be used for exploitation, became engaged in the fight. Small parties of the leading waves worked forward to the canal. The latter part of the day was devoted to consolidation of the positions and reorganization of the troops.

Today, the United States Somme Cemetery, located just west of Bony, sits on ground fought over by the 27th Division during this battle.