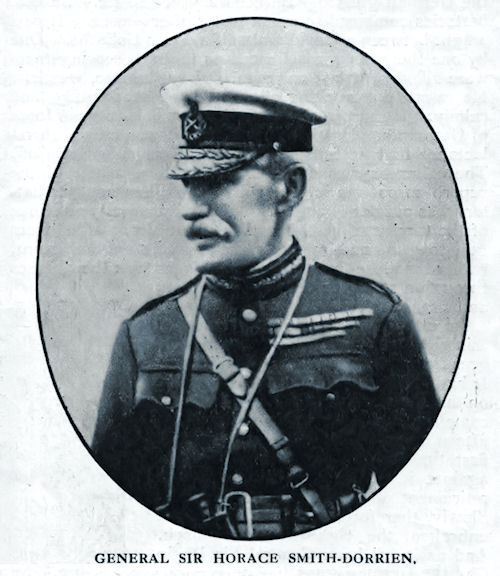 General Sir Horace Lockwood Smith-Dorrien (1858–1930) was born in Haresfoot, England. A veteran of the 1879 battle of Isandlwana and the Boer War, he assumed command of the II Corps of the British Expeditionary Force from August 1914 and the Second Army from December 1914 to April 1915. Well liked by his troops, he handled them with sympathy but, like his fellow corps commander Sir Douglas Haig (I Corps), he had little respect for the abilities of his commander-in-chief, Sir John French. This bad feeling was heartily reciprocated and would ultimately result in Smith-Dorrien's dismissal.

Fighting along with the rest of the BEF against overwhelming odds in August 1914, Smith-Dorrien managed his command ably in defensive battles at Mons and Le Cateau. In the latter engagement, Smith-Dorrien was forced into the unenviable decision to fight with exhausted troops and open flanks against a numerically superior enemy force. To retreat, though not contrary to orders, would probably have turned the British withdrawal into a rout, possibly resulting in the destruction of the BEF. Heavy fighting in unprepared positions against three German divisions of von Kluck's corps resulted in over 8,000 British casualties but delayed the enemy advance long enough to permit resumption of the withdrawal.

After participating in First Ypres in October 1914, the II Corps was taken out of the line, and, in the reorganization of the BEF that followed, Smith-Dorrien was appointed to command the Second Army. He again led his troops well during the German attack at Second Ypres in April 1915. Repeatedly ordered into costly and seemingly senseless counterattacks, Smith-Dorrien halted the attacks on his own initiative and recommended the partial abandonment of badly exposed sectors of the Ypres salient.

Sir John French, however, perhaps motivated by political considerations (Ypres had come to mean much the same to the British as would Verdun to the French a year later), and bearing little affection for his subordinate, relieved Smith-Dorrien. His capable replacement, General Sir Herbert Plumer, assessed the situation in much the same manner as had his predecessor; French was thus forced ultimately to accept most of what Smith-Dorrien had originally proposed. Smith-Dorrien himself, however, was never again to command in the field.

He retired in September 1923, living in Portugal and then England. He devoted much his time to the welfare and remembrance of Great War soldiers.