The peace treaty had been signed on 28 June 1919 by the statesmen, but the military needed its own ceremonial ending for the conflict.  Bastille Day, the great holiday of republican France was chosen for the occasion.  Here is a selection of photos and a contemporary news account of the grand day.

8 a.m. Avenue du Bois. The sun is now full upon the Triumphal Arch, close by. The chains which guard the entrance to the Arch have been removed. The ceremony will be begun by a delegation of a thousand men from those who have been maimed in the war. They will advance through the Arch to the cenotaph erected last week to the memory of the dead in the war and will salute that altar before taking seats reserved for them. (The first thought of France always goes to her dead.) Very many of the mutiles have one leg, one arm, one eye gone. Many are on crutches. Nearly all wear medals — the Croix de Guerre or the Legion of Honor or the Medaille Militaire. Some cannot walk; some, with both legs gone, can never walk. These are wheeled on long, low chairs by the more able-bodied wounded or by nurses. Some of the mutiles are totally blind and are led by their comrades. But their faces are transfigured. Tears streaming down his face, one of the blind exclaimed : "I feel it all. I see!"

8:30 a.m. Avenue de la Grande Armee. From my perch here, to which I hastened half an hour ago, lean watch the procession pass along this, its first street, and can also see it pass under the Arc de Triomphe near by. With the broad Avenue des Champs Elysees, the equally broad Avenue de la Grande Armee forms a west-to-east line through the Arch. The ample sidewalks are densely crowded; it is hard to wedge your way through. Those persons who have not been able to elevate themselves over the heads of others on chairs, stages, or stepladders have dis covered that, after all, they are favored; they are now gazing up into the tilted tinted glass signs over the shops, which perfectly reflect what is going on in the middle of the street. 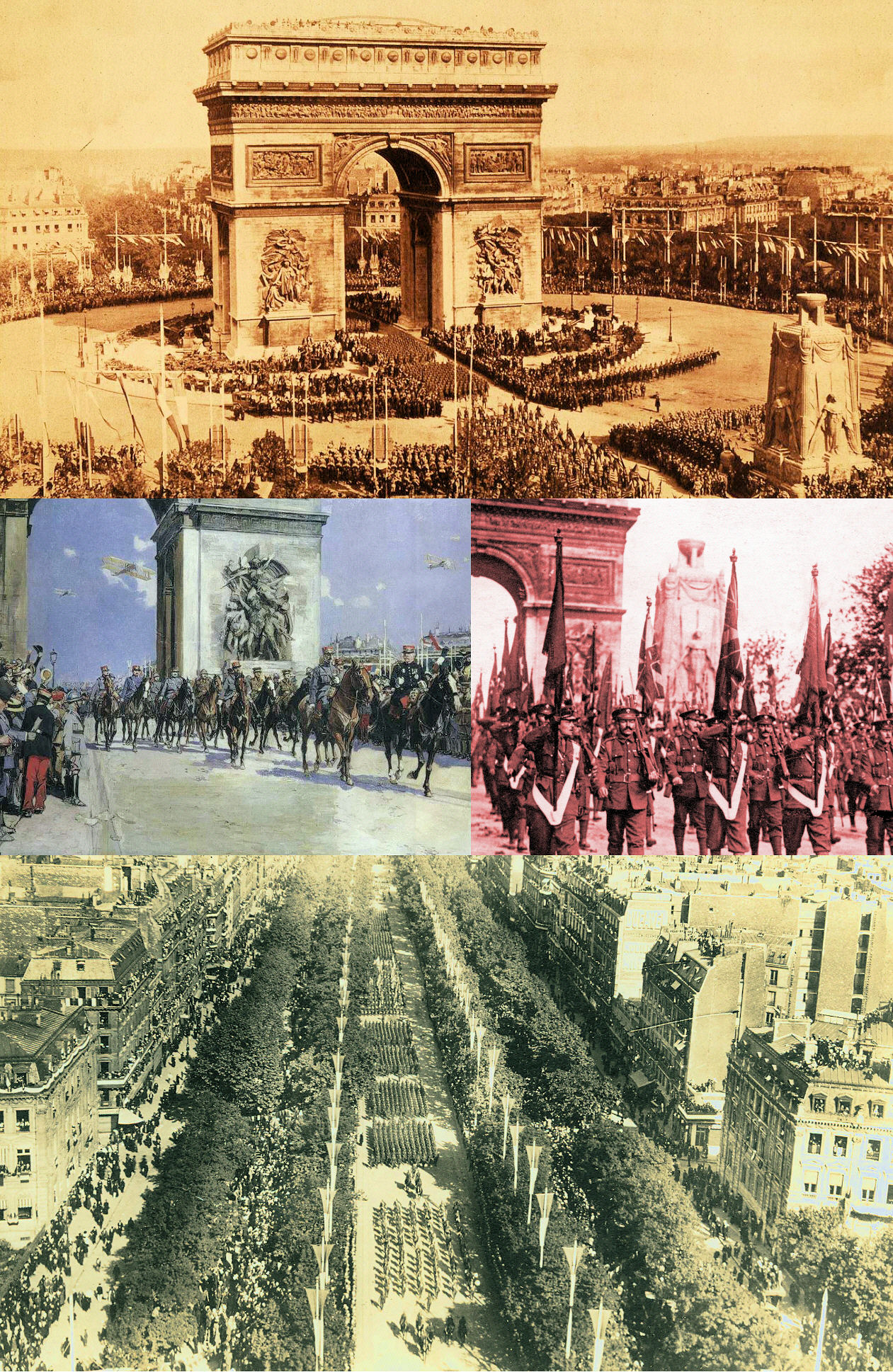 From Top: American Troops Passing Through the Arc;  Marshals Joffre and Foch Lead the Parade; British Troops; View from Top of Arc

A cannon booms, its echo taken up by the cheering thousands on the sidewalks and balconies and roofs and wherever they can find a place. The procession is starting from the Porte Maillot, which leads from the suburb of Neuilly into the city proper. In less time than one would fancy a squadron of the Republican Guard, in gala attire, comes in sight, a serried rank of red, black, white, and glittering brass.

Then a space of twenty yards or so, and a mighty shout rises from the people. For there, riding side by side, are Joffre and Foch. The two Marshals appear like two slowly moving statues, representing the genius and glory of France. They seem to unite all a warrior's qualities — the cold head, the warm heart; originality and initiative, energy and efficiency ; finally, the readiness to sacrifice, whether themselves, their men, or their territory. Of course the two Marshals stand specially for the Marne; one for the first battle there, nearly five years ago, and the other for the second battle, a year ago. The relief of the crowd on seeing Joffre actually in the parade finds quick expression. By an incredible and painful oversight or intention (which recalls the treatment of General Wood at home), the name of the hero who had saved Paris in 1914 had not appeared in the official announcements. "L'lntransigcant " and other papers made such a protest that the blunder was atoned for as far as could be. As he passes "Papa Joffre" looks portlier and more paternal than ever. But those of us who are his special admirers fancy that we detect a sadness in his face — as of one who had met a new disillusionment Foch's attitude towards his senior is admirable — he always keeps his horse just the least bit in the rear of Joffre's mount. Each Marshal wears the uniform in which he has become best known: Joffre in black dolman and red trousers and Foch wholly in gray.

As Commander-in-Chief of the Allied Forces, Foch leads detachments from those forces. First comes Foch's Staff, a large body of well-mounted officers. Then (as seems appropriate to us Americans!) come our own detachments in their alert, special West Point step — a hundred and thirty instead of the usual hundred and twenty steps to the minute Our men are in ideally exact block for mation. . .Our soldiers are headed by martial, stern-looking General Pershing. His cap visor and his chin seem on about the same angle. The composite battalion of infantry, made up of the best men from all the divisions, is followed by a naval detach ment, which is getting even greater ap plause from the crowd. Yet, despite the bands' "Over There," all our men look a bit solemn, and a voice near me rings out: "Sonriez un pen."

The "smile a little" has its effect upon the heavier-moving, less military-looking Belgians who follow more smil ingly, General Guillain at their head. . . Following the Belgians come the British. Field-Marshal Sir Douglas Haig, Commander-in-Chief, leads them. . .Next to the satisfaction of finding Marshal Joffre in the parade is the people's pleasure in seeing Marshal Haig there, for they had not been informed that he would be.

As have been all Parisians throughout the war, so the people about me are much im pressed by the British officers' smart appearance. . .The onlookers are now frankly admiring the supple, muscular quality of the men trudging by, the bare-kneed Scotch and the bluejackets being the most warmly received. 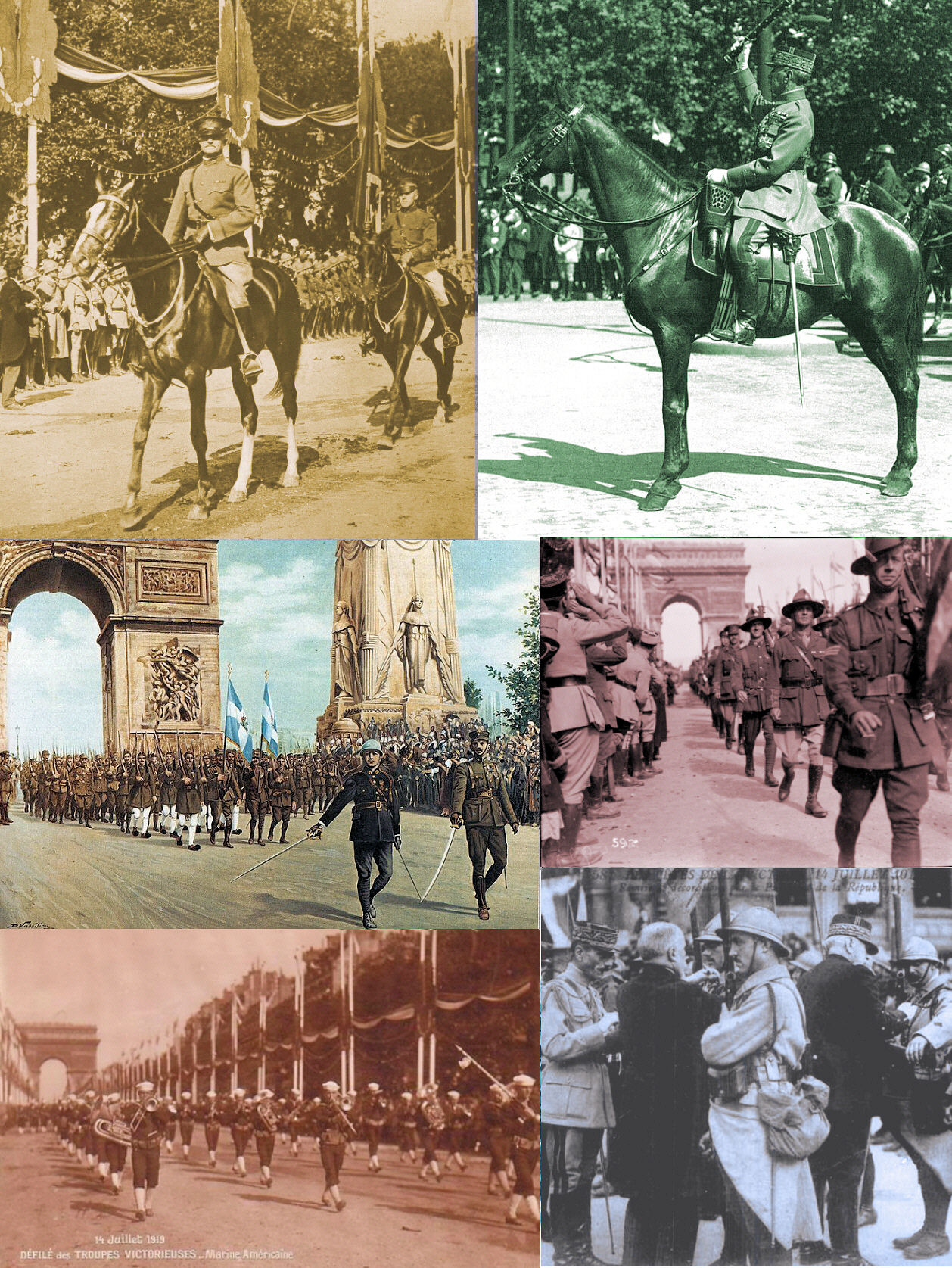 Now come the Italians, briskly moving to the strains of their national anthem. I expected to hear a sharp comment or two concerning the crisis at Fiume the other day between some French and some Italians, but there are no such comments about me — only hearty applause, which the Alpini well deserve. Besides, the French can hardly forget the blood from the south spilled for them in the Champagne, where the Italian regiments lost half their effectives.

Now follow the Japanese. . .and here is another surprise — the Greeks, no longer in the short white skirt, but in tight white trousers. Of all the nations, the Poles, now passing, are getting the most strenuous applause so far, save that for Americans. They are not many in number, but as their white eagle heaves in sight the past history, present plight, and future dreams of Poland seem to find vent in respon sive shouts of sympathy.

Now follow the bronzed and swarthy Portuguese; well set-up Romanians; nerv ous-looking, resolute Serbs; strange-looking agile Siamese ; and, finally, the men who seem to come closest to the Poles in Parisian esteem, the Czechoslovaks, in dark-blue caps and many wearing the red fourragere won in the French army.

But where is Russia? — not Bolshevist Russia of the past year, but the Ally who sacrificed two million men that this Peace Day might come? Where are the representatives now in Paris of those martyrs?

Now there is appropriately a pause of some moments before the second half of the procession appears. It is led by the Commander-in-Chief of the French Army, the hero of Verdun, Marshal Petain. He looks younger, he is more athletic and buoyant, slenderer, and more graceful than his portraits show. He sits his white horse with juvenile ease. He smiles frankly. Behind him rides one who ought to be the fourth Marshal of France — Castelnau, who saved Nancy and the east front. Every one notes the black brassard ou his arm; everyone is saying, "He lost all his sons in the war."

A similar movement of sympathy there is as one-armed Gouraud rides by. He is the symbol of duty and sacrifice. Of the other generals, Mangin, the square-jawed, gets the lion's share of applause. All know the story of the final phase of the war and of Mangin's tenacity iu grappling with the Boche, in downing him, and in holding him down.

But what shall we say of the poilu himself? — our poilu too, as he seems, for not only did he fight from the first day to the last day of the war, he fought for all of us. There are many of him, representing the twenty-one corps of the army proper, a company from each regiment which had earned the fourragere of the highest rank. They pass by to the music of the " Chant du Depart," the " Marche Lorraine," the "Sambre-et-Meuse." They pass by bearing flags full of holes. Then come the armies of the Orient and of Africa followed by men from the navy, the cavalry, the airmen.

The procession has taken two hours to pass. But other men also follow — the heroes who have given their lives for La Patrie. They indeed do not merely follow. They are everywhere. One feels their presence in all the ranks of marching men.