The Great War's Influence Today:
The Rise of Technocracy

Twentieth Century warfare finally established state-sponsored R&D as a public duty and necessity. Rapid development of new weaponry, ersatz strategic materials, and more productive manufacturing processes became an imperative of national survival in total war. . .the World War I model of command economy in the new technology as well as in investment and distribution was enduring and seductive. Thorstein Veblen, Herbert Hoover and assorted technocrats invoked it in the United States. . .As the Civil War produced the National Academy of Sciences and Land Grant colleges, World War I produced the National Research Council and the Nation Advisory Council for Aeronautics [predecessor to NASA].


Walter McDougall in The Heavens and the Earth: A Political History of the Space Age

After the United States entered the war, government agencies, such as those mentioned by Professor McDougall, proliferated. The most important of these was the War Industries Board, eventually chaired by financier Bernard Baruch. It managed the nation's strategic resources, increasing the country's industrial capacity by 20 percent in just nineteen months 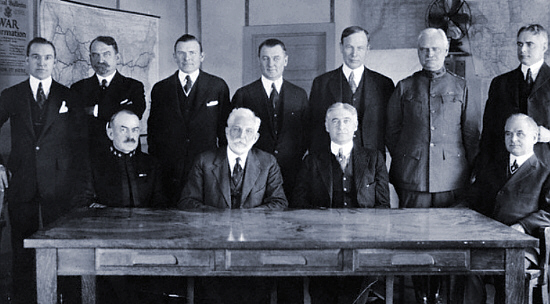 
Interestingly, the War Industries Board was dissolved in 1919, but many of the new agencies were kept, and much of the expansion of government departments remained, at least at levels higher than those before the war. World War I is when government, impelled by the technocratic demands of war started to become enormous. The graph below that shows how government spending predictably consumes more of the economy during wartime is quite revealing in another respect. Each of the peaks corresponds to a major American war: the Civil War, WWI, and WWII from left to right. After the Civil War, the percentage of government spending returns to about prewar levels. This does not, however, occur after either World War. In both cases not only is the postwar percentage higher than before the war, but the percentage continues to grow during peacetime. This is because the "command economy" approach, as McDougall points out, proved to be enduringly "seductive." 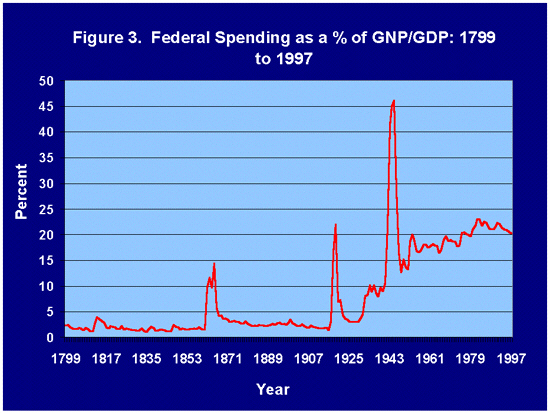