Come On, Los Angeles, Give Us a Pershing Square Worthy of Its Namesake 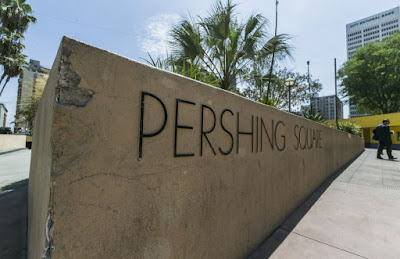 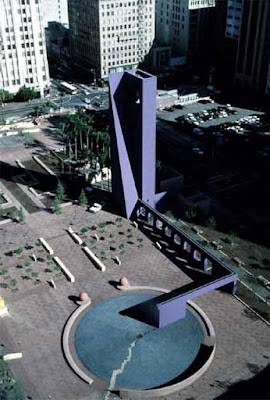 A 2004 international survey of the best and worst public spaces in the world (the Piazza del Campo in Sienna was #1) described Pershing Square in Los Angeles as follows:

"Two blocks by three blocks long, this ugly open space sits on top of an underground parking garage. This would be good use of the space, except that the square is rarely used. Office workers in the nearby building or guests at the Biltmore Hotel, one of the oldest and most prestigious hotels in LA, are the only people that you may find in the square, other than homeless people." 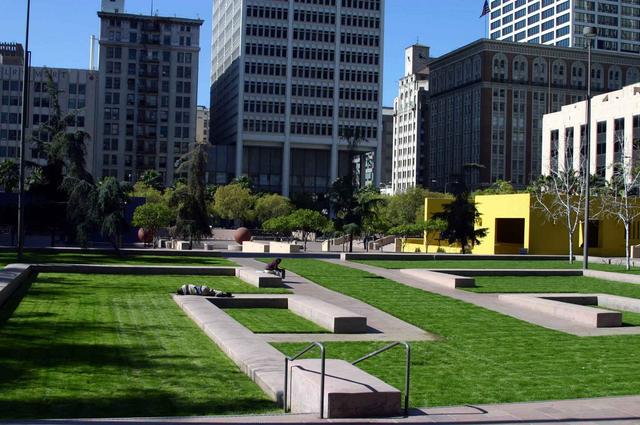 Today, 18 December 2015, three finalists will be chosen in the Pershing Square Renew Design Challenge. They will be chosen from ten semifinalists, who were named in October, that include not only some of Los Angeles’ most august architecture firms but also some of the most renowned international firms. The final selection will be announced on 1 April 2016. Let us pray – that in the spirit of the WWI Centennial – the winner creates something that honors General Pershing and the Americans who served under him. A big part of their challenge will be what to do with the on-site memorials, which include two plaques to General Pershing and a Doughboy statue.  (There is also a cannon from the USS Constitution, a Spanish American war memorial and a monument to Beethoven.)

I have invited Los Angeleno and WWI Centennial Commission representative Courtland Jindra to share his concern about this important public space with our readers. Here are his comments:


In 1866 the initial city park in Los Angeles was founded as Plaza Abaja.  It immediately became a beloved fixture of the community. In the years that followed, the park's name was changed numerous times as the sleepy LA area started to grow around it.

In 1900 the first piece of public art in the city was erected. A precursor to its future Great War connection, this monument was dedicated to those lost from the 7th California Infantry Regiment (which in future years would become the 160th Infantry Regiment, nicknamed "Los Angeles' Own") who were called into service in the Spanish-American War. For decades after, Memorial Day services at the Square led by veterans of '98 would occur. Originally a trophy cannon from the conflict was included nearby, but during one of the later re-dos of the park it was given to a museum,and never returned. In the 1950s, a large part of the pedestal was also removed due to the parking garage that was added underneath. The extreme weight of over 15 thousand pounds was deemed unsupportable by the underground structure. In the 1930s, a cannon from the USS Constitution was also given to the park to include as a centerpiece (a memorial to Beethoven was also added that decade when the LA Philharmonic was housed across the street).

On 15 November 1918, Central Park, as it was then known, was renamed Pershing Square. It was the first of many WWI tributes and memorials that would soon blanket LA County.  By 1924, a monument designed by local artist Humberto Pedretti was erected, dedicated to the "Sons and Daughters of Los Angeles who served in the World War." The Doughboy statue avoids references to the horrors of war, depicting a soldier carrying his unit's colors forward into battle. The pedestal is surrounded by various inscriptions.  Also of note is the large victory medal that is included on the back side with all the countries that U.S. troops served in and a decorative French Poilu helmet sitting in an olive branch given by Veterans of France. In subsequent years the park became an important area for rallies, recruitment, and liberty bond drives during World War Two.

Surprisingly General Pershing did not get a statue or plaque in the park that bears his name for a few decades. In 1955 a plaque giving a short summary of his career was added. Then, in 1960, during Black Jack's 100th birthday celebration, a marker recognizing the commemoration was also put in the ground. To further memorialize the General of the Armies, a small sapling was flown in from Laclede, Missouri that was planted by nephews Frank and James Pershing, as well as grandson John Coghlan. Unfortunately, no one knows if the tree is still there, though it seems unlikely, given  that subsequent redesigns of the park razed most of the ground.

In 1992 the current, and most disliked, version of Pershing Square debuted. In an attempt to try and keep vagrants out of the park the design installed walls on the exterior. Grass was also largely removed to try and prevent people from sleeping there. Unfortunately, the new park was so uninviting that it soon became a ghost town other than the occasional worker who might lunch there. In the decades since it was unveiled, downtown Los Angeles has rejuvenated and the population has increased 500 percent.  Citizens have advocated for Pershing Square to be a centerpiece of the area once again.

Pershing Square Renew was set up as a public/private partnership to redesign the space once again. Given that we are in the centennial period of the Great War, I have advocated that more should be made about its military connection. All of the memorials should be spruced up, but the Doughboy is arguably in the worst shape. The pedestal has cracking and discoloration, and some of the ceremonial stars have fallen off through the decades. The current plan to is that the park will be completely redone by 2019, which seems almost perfect. Would not it be something to reopen it on the General's birthday?
Courtland Jindra