Notes on the Brusilov Offensive 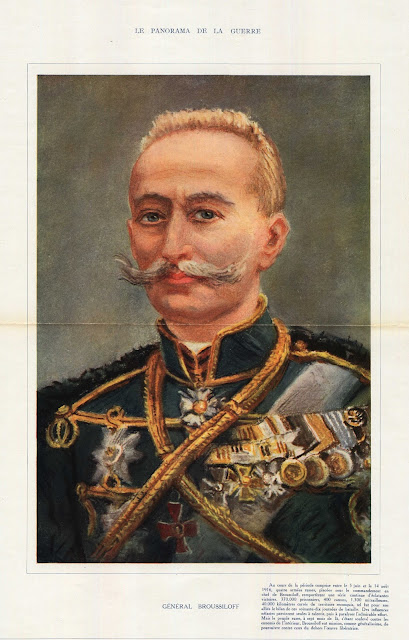 In June 1916 Russian armies on the Southwestern Front under the command of General Aleksei A. Brusilov broke the Austro-Hungarian line in several places and drove them back as much as 160 kilometers in some sectors in what was by most estimates the greatest Russian military achievement of the war. At Habsburg positions deemed impregnable, brigades disintegrated in the face of the meticulously planned and precisely executed Russian assault.


Brusilov's forces took more than 350,000 Habsburg soldiers prisoner, and an entire Austrian corp—seven divisions—broke before the onslaught. The Russians regained all of the territory lost on the front in 1915 and advanced to the foot of the Carpathian Mountains, where they threatened Hungary itself. Only rapid action by Germany's military leaders held the front together and prevented the collapse of the Habsburg Empire in 1916.


At the start of the attack, Brusilov had available on the Southwest Front:

The defence [by the Central Powers], however, had been successful only because 20 German divisions in all had been brought here. . .


Only the crudest estimates of casualties are available for the Brusilov Offensive. The Austro-Hungarian army suffered a staggering total of 1.5 million men (including 400,000 taken prisoner). Comparable estimates for the Russian Army are something over one million.

In the end, the Brusilov Offensive destroyed the military capacity of the Habsburg Empire, brought Romania into the war, forced Vienna to accept Berlin's almost total control in the east, and relieved the fronts in both Italy and France from enemy pressure.