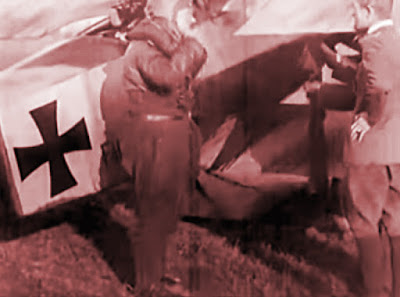 One of our readers has shared a YouTube video on the Red Baron that is actually quite revealing.  It's clearly something of a propaganda piece, but the attitudes and emotions expressed seem sincere. It was made in September 1917, and he's not showing the nervous, burned-out look of the following spring, just before his death.  The film starts with  the ground crew rolling out the Dr.I triplane,  then von Richthofen greeting the men, getting helped into his flight gear, and interacting with his fellow pilots.  There is also an interesting segment at the end showing the pilots inspecting bullet holes on a damaged aircraft.  You can find the video here: