Dinant, Belgium, on the River Meuse is a strikingly beautiful town, most famous before the war for it's dramatic Notre Dame collegiate church and as the birthplace of saxophone inventor,  Adolphe Sax. The town is dominated by a huge, imposing hilltop citadel built in 1815 on the site of a 9th century fort of the  Holy Roman Empire.  In 1914, between 15 and 24 August, it became the place where French and German forces first fought each other on Belgium soil in the Great War.

French scouts approaching from the south earlier had entered Dinant and discovered to their surprise that the town and fortress had been abandoned by the Belgian Army. Meanwhile, the German Army was sweeping down from the northeast. One of the first French units to arrive was the 33rd Regiment of Infantry, once commanded by future marshal Philippe Pétain, and that day the unit of future president of France, Lt. Charles de Gaulle.

On 15 August, the same day that Fort Loncin was destroyed at Liège, a contingent of French soldiers was sent up to the citadel to prepare to defend the city and Meuse Valley below, down which they expected the enemy to be advancing.  Supporting these forces was Lt. de Gaulle, who was quickly shot in the leg crossing the bridge across the Meuse.

Afterward the detail assigned to the citadel received an unpleasant and fatal surprise.  A battalion of German troops approached along the adjacent cliffs and, undetected, entered the fortifications from the undefended rear. Badly outnumbered, the French soldiers chose to retreat and, unfortunately for them, fled down a dead end gallery. All 80 of those  men  were killed, along with 12 Germans. A monument marks where those first soldiers were cremated.


Dinant  also became part of the heritage of German atrocities later in the month when 674 civilians were killed in the fighting, including 112 executed for resisting or firing on the German forces. 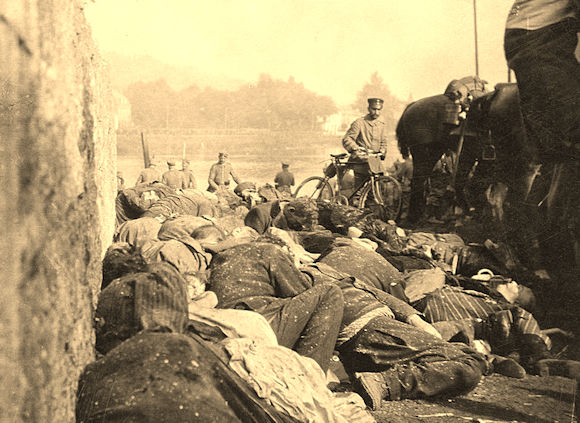