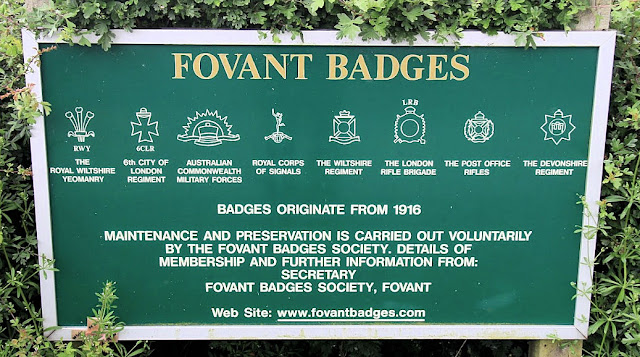 On the Wiltshire Downs, southwest of London, there are a group of chalk carvings that make up an unusual, perhaps unique, World War One memorial. These are depictions of unit insignia, some of which were created by the soldiers while they were stationed in camps on the plain below. The Fovant Badges, as they are collectively known due to the proximity of the village of Fovant, consist of a group of seven that date from the war plus one that was added in 1950, one in 1970, and a poppy carving between the Post Office Rifles and the Devonshires that was created for the centennial in 2016.

During the war era there were 11 more cuts in the hillside; these are no longer viewable.  Additionally, there are another five that date from the war situated on hills nearby, including the well-known "Map of Australia;" three others of this group are un-restored.

These cuttings were made by digging small trenches according to a grid scheme which were then filled with small pieces of chalk, the local bedrock. In order to be visible from the camps they had to be large. For example, the Australian "Rising Sun" below is about 66 yards wide and 46 yards tall. 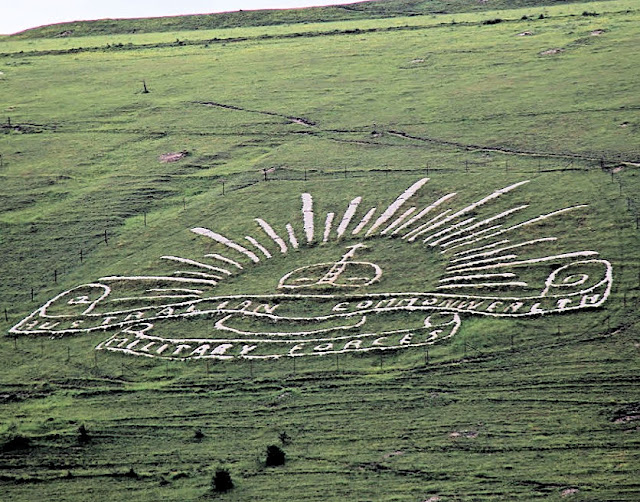 The sites require frequent maintenance to prevent deterioration. This work has been performed by the Fovant Badges Society, the Sutton Mandeville Heritage Trust, the Map of Australia Trust, the Australian War Museum, and local Territorial Army formations.

Since 1950 there has been an annual "drumhead" service conducted by the Fovant Badges Society and held in the village. There have also been ceremonies held at the sites, even though the steep incline makes this challenging. In November of last year a group of Australian Army officers, headed up by Major General Anthony Rawlins, viewed the Map of Australia and the Fovant Badges and met with volunteers and local officials. 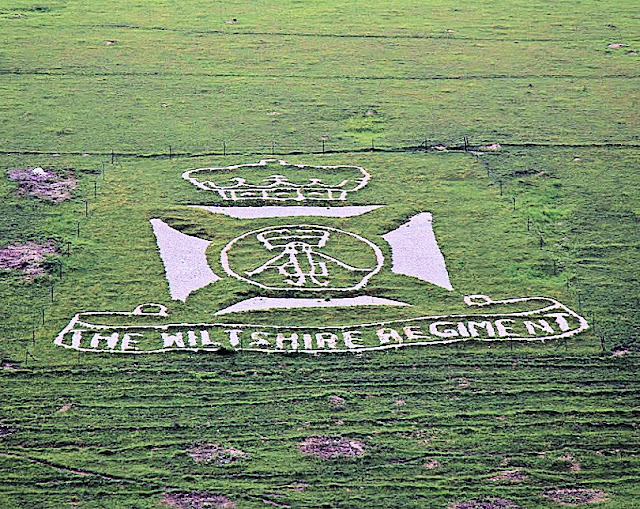 These carvings and sites are all protected as Scheduled Monuments under U.K. law and carried on the lists of the Imperial War Museum as war memorials. They are also near the site of an Iron Age settlement.

There are other carvings in the same chalk formations. The most famous are the Westbury White Horse and the Uffington White Horse, both of which are much older—the latter is recognized as prehistoric.

Most of the Fovant carvings, as well as the Westbury White Horse, can be seen from the A30 highway, which has lay-bys for convenient viewing.