G.K. Chesterton in the Great War


When war was declared, G.K. Chesterton’s brother Cecil, editor of The New Witness, wrote in his editorial that “the news comes as an immense relief after the long strain of waiting. Stern as is the struggle ahead of us, dreadful as are the possibilities which defeat would involve, it is something to have done with the scheming fear that hung over us all last week — the fear that we were going to see England lose her honour” (quoted in Finch, p. 228).

GKC saw the war as a crusade and was as certain that England was right as he had been sure that the Boer War was wrong. In his obituary of Pope Pius X (which was published toward end of August), GKC wrote, “If the Germans prevail, of course there will never be any history any more. There will only be an enormous fable eating up all the facts.”

In November 1914, he published The Barbarism of Berlin, a short book based on his Daily Mail articles, which was an attack on the immorality of the Germans. On 25 November, he was addressing a large crowd of undergraduates at Oxford and had to leave the platform through dizziness. He managed to get home, and collapsed into bed so heavily that he broke the bed. His illness turned out to be a heart problem, perhaps exacerbated by excessive alcohol. On 24 December, he fell into a coma. There was no improvement until January 1915, and he was not really lucid until April. 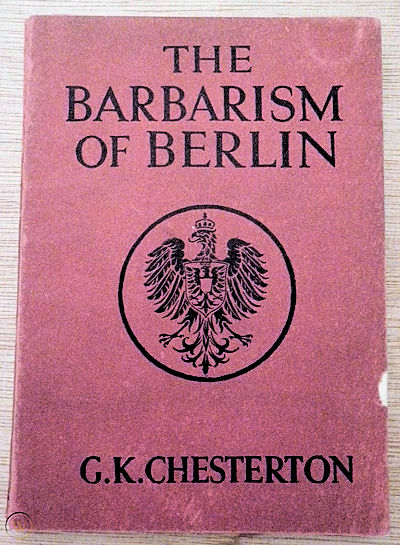 While he was ill, his weekly column in the Illustrated London News was written by his friend Hilaire Belloc. Chesterton took it up again in May and thereafter slowly got back into his busy schedule of writing and speaking.

The last issue of The New Witness to be edited by Cecil Chesterton was that of 12 October 1916.
He decided to join up, and his brother GKC had agreed to become editor until Cecil’s return from the war. “I am the worst editor in the world” he confessed. Much of his energy in early 1917 taken up with denouncing pacifism—above all the conscientious objection of the Cambridge philosopher Bertrand Russell.

On 26 July 1917, GKC commented on the Russian Revolution, which was, he said, run by a clique of Jews, not rascals, but idealists, which “may be more of a problem.” (Bernard Levin, a leading British columnist who frequently quoted Chesterton, in The Case for Chesterton  brought up some of his light verse and said “The best one can say of Chesterton’s anti-semitism is that it was less vile than Belloc’s; let us leave it at that”: quoted in Wikipedia).

Cecil was wounded in France. He was brought back to recuperate and went off to France again. He collapsed after a 12-mile march in the rain from Ypres in the final stages of the war and died.

GKC had been very close to his brother and this news devastated him. He decided to continue with the editing of The New Witness, which he had only taken on to please his brother, in honour of his brother’s memory, and he did that for the rest of his life, initially with the help of Cecil’s widow. After 1925 it was known as G.K.’s Weekly.

The above information comes from Michael Ffinch, G.K. Chesterton (London: Weidenfeld and Nicolson, 1986) as presented in Science Fiction and Fantasy Writers in the Great War.