Burial Detail, Belleau Wood — An Old-Timer Is Laid to Rest 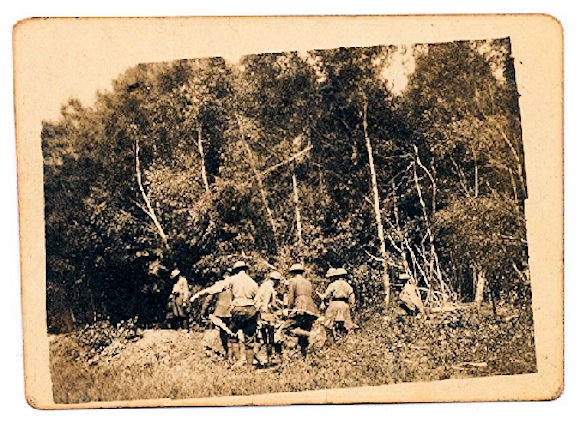 Among the wartime effects of Cpl. Frank W. Dunham of 15th Company, 6th Machine Gun Battalion, are several photographs which were taken sometime during the fighting at Belleau Wood in June 1918 by 1st Lieutenant Victor Bleasdale, an officer of 15th Company. Dunham and Bleasdale, despite their difference in rank, were old campaign chums, having originally served together as privates in Haiti. Dunham was sent back to the States after being wounded at Blanc Mont, and Bleasdale, who was still serving with 15th Company in 1919 as part of the Army of Occupation, sent several letters and the photographs to Dunham from Germany.

One of the photographs shows four Marines carrying a body toward a stand of trees. On the back of the photo, the scrawled caption in pencil reads: “1st Sgt Hunter carted to the grave. Belleau Wood.”

First Sergeant Daniel Amos Hunter, USMC, known to his men as “Pop,” was a crusty old-timer who had served four enlistments in the regular Army, fought in the Spanish-American War, and was on his third hitch with the Marines. He had served in Santo Domingo, Mexico, Cuba, aboard various ships, and, as a seasoned veteran of four courts martial, had seen the inside of more than his share of brigs.

At shortly after 3 a.m. on 6 June, Marines of the 49th and 67th Companies, 1st Battalion, 5th Marines, lay hidden in position on either side of Hill 142 southwest of Belleau Wood. According to the original plan, two additional companies, the 17th and 66th, should have been in position to join the assault but had not yet been relieved by the French and so were still deployed near Les Mares Farm. The assault was also to have been supported by barrage fire from two companies of the 6th Machine Gun Battalion, but one of their companies was tied up elsewhere, also awaiting relief from the French, which meant that the two companies of the 1st Battalion were supported by just ten guns of 15th Company dug in behind them, between Champillon and Bois St. Martin. Among these ten machine gun crews was Cpl. Dunham.

At first light, 3:45, 1st Sgt Hunter—as described by George Clark—“…strode out before his line, checked right and left, then, with a whistle to his mouth, blew it once. Forward, over his head, and downward went his cane, pointing toward the company’s objective, straight ahead…” The two companies set off down the slopes of Hill 142 and out into the open, moving northward across wheat fields still softened with nighttime mist toward the village of Torcy. According to Lt. John W. Thomason of 49th Company, the wheat was wet with dew and festooned with poppies and the immense red sun was just a hand's breadth above the horizon. It was pleasantly cool and the blue woods ahead looked inviting…, and it was just then that hell fell out of the heavens, with artillery and machine gun fire hitting the Marines simultaneously.

Much of the devastating fire was from Maxim machine guns manned by three companies of the German 460th Infantry Regiment, barricaded in a wooded copse just to the northwest, with a clear view of the advancing Marines. The Germans were taking barrage fire from the guns of 15th Company, but it was not enough to silence them. 67th Company, advancing through the wheat, was completely cut to pieces. “Pop” Hunter was hit, got back on his feet, was hit again and again rose—all the while shouting to his men to keep moving—and then was hit a third time, in the head, and this time he lay where he fell.

Some days later the dead were gathered up and laid to a proper rest by burial parties of Marines. Much of the grisly work was done by new replacements, led by a few seasoned veterans. One of the newcomers to 67th Company, detailed to burial duty that day, was Pvt. Elton E. Mackin, who had only been with the company about a week. A trench had been dug by a squad of Engineers and a corporal of the 67th, “Tugboat” Wilson, was working down in the trench, taking the bodies one at a time, laying them out in position and covering them with earth. As the bodies were being handed down, an “old-timer” stopped to observe the proceedings. Occasionally, when one of the bodies was an officer, the old-timer would silently flick off a salute. What happened then is best described in Mackin’s own words:

“After a time, as the work progressed, a body was handed down dressed in forest greens with a top-cutter’s chevrons above hashmarks denoting seven enlistments. A whistle dangled loosely from a cord about the sergeant’s neck, and the flap of his holster flopped about untidily. The old-timer, still watching, made a sharp salute. Turning to a boot he said, “Get a blanket, soldier. Wrap him up proper. That’s ‘Pop’ Hunter.”

1st Sergeant Hunter would posthumously be awarded both the Distinguished Service Cross and the Navy Cross for his actions that morning. His citation would read: “For extraordinary heroism in action. He fearlessly exposed himself and encouraged all men near him, although he himself was wounded three times.” 1st Sgt. Hunter was also a recipient of the Silver Star Citation.

I would like to express my gratitude to Paul Higgins, whose wife is the great-grandniece of Frank W. Dunham, for permission to use this remarkable photograph of 1st Sgt Hunter’s field burial.