Falkenhayn, Verdun, and the Will to Fight 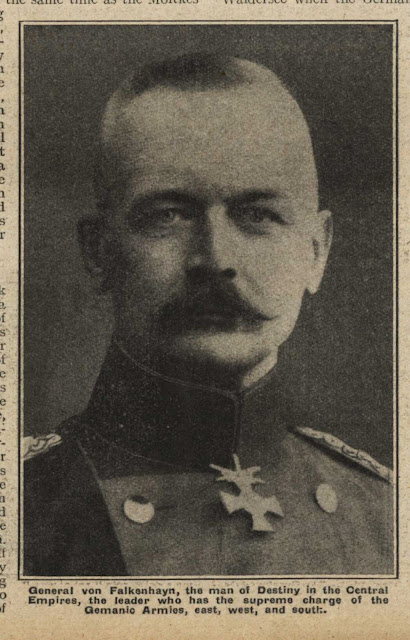 In late 1915 Falkenhayn and the rest of the general staff planned a large offensive near the Meuse River. Their intent was to break French state's will to fight. According to Falkenhayn’s plan, French military defeat would be so terrible and irrecoverable that France would quit the war. This would leave the British at the mercy of what would be a correspondingly larger German Army. Falkenhayn selected the French position at Verdun as the focal point of the offensive. Here the French had unintentionally extended their lines in a broad salient centered on the Meuse heights. This position left the French flanks exposed, and only narrow routes for reinforcement and counterattack. The figure below depicts the battle lines at Verdun between the beginning of the German offensive in 1916 and the limit of German advance. The general direction of the German attack was north to south, or top to bottom in the map. The German plan called for massive artillery bombardments followed by a multi-division ground assault intended to trigger a crushing rout.

German intelligence backed Falkenhayn’s assessment of French will to fight:

Many French deserters spoke of the war-weariness of the French soldiers and particularly of the adverse effect on French morale of the failure of and the high casualties suffered during the offensives in [1915]. . . . When the French began instituting a defense in depth and leaving their first trench line only lightly defended,  German intelligence interpreted this to mean that the French command feared that their troops would break under the German Trommelfeuer [drum fire].

While French will to fight was indeed suffering, the German assessment of French tactical-operational will to fight at Verdun was dangerously exaggerated and arguably wrong. German intelligence officers made two mistakes. First, they failed to account for the French noria system.  French Général de Division Philippe Pétain, then commander of the Second Army’s Verdun salient, recognized that French soldiers were suffering from exhaustion. His noria reserve rotation plan was designed to provide soldiers rest, to rebuild their will to fight, and to ensure the Germans would face only fresh troops with strong will to fight.vTo the German intelligence officers, this rotation—designed to improve French will to fight—gave the appearance of thinned lines and weak will.

Second, the Germans assessed that the poor morale (or temporary feelings) of captured French troops amounted to poor will to fight among all French troops. It is generally unwise to extrapolate the unsurprisingly sour disposition of prisoners to the will to fight of active, armed soldiers, at least not without solid corroboration. More important, the Germans took poor individual morale to be an indicator of weak unit cohesion and the unwillingness of the Second Army to hold the line or counterattack. Yet it is possible—even common—to have poor individual will and strong collective, unit-level will to fight. Despite the external appearances given by poor prisoner morale, the French at Verdun were more than ready to hold the line against withering German artillery fire and bayonets. Falkenhayn’s entire plan rested on a false assumption about French will to fight, and the plan failed.

Both sides suffered tremendous losses. French casualties exceeded 300,000. But the Second Army held and Falkenhayn’s plan cost the Germans an equivalent number of casualties: over 300,000.  German casualties over ten months at Verdun may have amounted to approximately two-thirds of the entire U.S. Army’s active duty force in early 2018. Many other factors contributed to German failure, including bad weather that bogged down German artillery. Whatever the proximate cause of their tactical defeat, the Germans did not achieve their objectives: Falkenhayn failed to seize Verdun, failed to break French tactical-operational will to fight in 1916, and failed to break French state will to fight. The war went on for another two years, and the losses at Verdun contributed to Germany’s strategic defeat.

Writing about Verdun in his 1919 memoirs, Falkenhayn describes “powerful German thrusts” that had “shaken the whole enemy front in the West very severely” and that had placed doubt in the minds of the Entente partners. French counterattacks were “desperate,” made up of troops collected in “extreme haste.” He estimated German to French casualties at an unrealistic 2:5 ratio. He follows with paeans to German will to fight, and it is abundantly clear throughout his memoir that he had little respect for French fighting spirit. Falkenhayn is to be commended for his genuine appreciation for will to fight as a central factor in war. If he had had a better analysis method to help him understand French will to fight, he might have altered his plans. His hubris and jingoistic vision of Teutonic will to fight made the defeat at Verdun far more likely. Nothing can be done about hubris. Much can be done about will-to-fight analysis.

Source: Will to Fight: Analyzing, Modeling, and Simulating the Will to Fight of Military Units, The Rand Corporation 2018