Germany Gets a New National Anthem 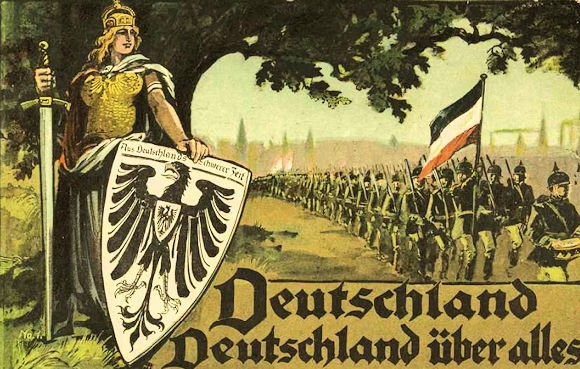 In the legends and traditions of the Great War there is a popularized event known as the Kindermord von Ypern, during the German "student battalions" rashly attacked en masse, supposedly singing "Deutschland, Deutschland über alles," the first verse of "Das Lied der Deutschen" (“The Song of the Germans”), a rowdy Pan-German song favored by students in beer halls. Long after the Christian symbolism of the inspirational sacrifice of beloved youth had grown old, the song was still on everyone’s lips.

The rulers of the many German states of the day regarded Hoffmann von Fallersleben’s message as seditious, as they were against unification, particularly a unification dominated by Prussia. Mischievously juxtaposing lyrics extolling Pan-Germanism to the tune of a paean to an absolute monarch was revolutionary satire, the song became symbolic of the March Revolutions of 1848, which were sparked by the overthrow of King Louis-Philippe of France and repressed by a combination of force and guile.

For the entire 47 years of its history, the national anthem of the German Empire was "Heil dir im Siegerkranz" (“Hail to Thee wearing the Victor’s Wreath”), which had been the royal anthem of Prussia since 1795. Like "Das Lied der Deutschen," it was also a borrowed work; the lyrics were written by Heinrich Harries (1762–1802), originally for the King of Denmark, and the melody was derived from the 1745 British national anthem “God Save the King” (composer unknown but likely English plainsong).

Never popular, after the downfall of the Empire it was quickly replaced by—you’re right—"Das Lied der Deutschland," which the Weimar government re-titled "Deutschlandlied" (“Song of Germany”) in 1922. This has remained a German national anthem ever since, except in East Germany (1949–90), whose anthem was "Auferstanden aus Ruinen" (“Risen from Ruins”).

From 1933 to 1945 the official national anthem was actually the "Horst Wessel Lied" (“Horst Wessel Song”), also known by its opening words, Die Fahne hoch (“The Flag on High”), although the first verse of "Deutschlandlied" was often played or sung before it. As a result, since 1952 the first verse of "Deutschlandlied" is not sung at public performances in Germany. Also, after the European union movement took hold, the verse became politically incorrect, as the boundaries that were claimed for Germany by Hoffmann von Fallersleben in 1841 were the Meuse (in France and Belgium), the Nemen (in Lithuania), the Adige (in Italy), and the Belt (in Denmark).

Today the official anthem of Germany is just the third stanza, often called by the first line “Unity and justice and freedom, For the German fatherland!”