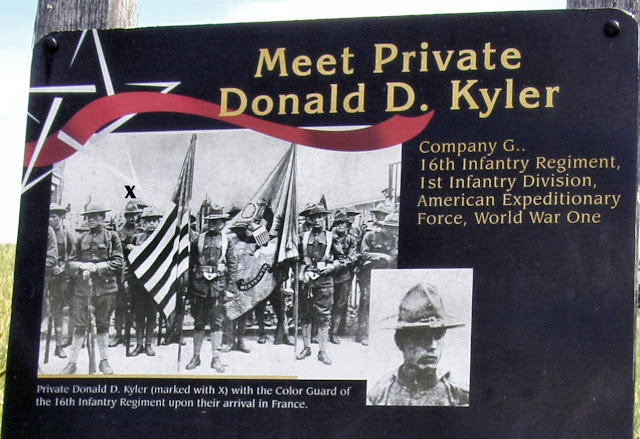 Sgt. Donald Kyler was a soldier of the 1st Division's 16th Infantry Regiment. He was 16 years old when he enlisted in the Army in April of 1917.  A native of Whitley County, Indiana, he grew up on a farm in the small town of Collamer. With his parents' permission, he enlisted at Fort Wayne, Indiana.  Here is his account of his first patrol into no-man's-land. During the war, Kyler kept notes on his experiences. He was 17-and-a-half when the war ended, a hardened, professional soldier. Of the 250 soldiers initially assigned to Kyler's Company G, he was one of only ten who returned to the U.S. with the regiment in 1919, the rest having been wounded or killed. The location on the Western Front is not identified but was obviously early in the division's deployment, possibly around the St. Mihiel Salient.

After Pinaire and I had been off the listening post a few days Lieutenant Phipps organized a combat patrol. About 20 of us were selected and given detailed instructions as to what each man was to do. The plan was that we were to crawl out of our front line trench at night and take a position crossing the gully that I mentioned earlier. We would go through a gap in our wire and maintain absolute silence. It was essential that it be done smoothly and without attracting the enemy’s attention. If the enemy should now that an ambush was being prepared, our mission would be a failure and we would be the targets for heavy fire from machine guns and mortars. Two of our flank men were to be armed with automatic machine rifles. The rest of us were given daggers and pistols. The pistols were lent to us from others in the company who were armed with them in addition to their rifles. Everything that might rattle or shine was removed from our persons. We also smeared burnt cork and oil on our faces.

When it became dark enough we crept out as planned. The night was damp and chilly. We wore raincoats and belts with pistol holsters and dagger sheaths. Gas masks and helmets were left behind. Each of us had several magazines of pistol cartridges. We took a position with our center astride the gully, with each wing extending out from at an angle. We settled down to wait as inconspicuously as possible in the brush. We were all apprehensive and scared. It was miserable waiting there. The plan was to let the enemy patrol leader get past our center. Then Lieutenant Phipps was to fire, after which we were all to fire and the wings rush in to cut off the patrol’s retreat. The two automatic riflemen were to fire automatic bursts in the direction from which the patrol had come, while the rest of us were to charge in and assault the enemy at close range.

Occasionally, an illumination flare went up from the enemy’s line. During the time of its duration we were absolutely still, hardly daring to breathe. The slightest movement might attract attention. After a considerable wait, some of our nervousness had left us and a sort of numbness had come.

We were then just outside the enemy wire and nearer to their trenches than to our own. There was occasional firing up and down the line, as was usual at night, but none in our vicinity. Then  faintly at first, we could hear an enemy patrol approaching. They were entering our trap. Tensions rose. Then someone in our group made a sound like a suppressed cough. The enemy patrol leader stopped and stood still a moment or two, then gave a signal and the patrol retreated rapidly. Lieutenant Phipps fired and we all did likewise with as rapid fire as we were capable of.

Some of the enemy were hit and went down. With the exception of a few dead or wounded the enemy patrol escaped. They had not entered our trap far enough for us to cut them off. They probably carried some of their wounded with them. It would have been foolish for us to have pursued them. The lieutenant signaled for a rapid return to our lines.

We knew that as soon as the enemy patrol had gotten into their trench the whole area would be raked by intense fire. We had to get through the gap in our wire, and quickly. Several of our men got snarled in our wire. Some did not seem to realize the urgency of getting to cover quickly. If there ever was the necessity for haste, regardless of noise, it was then. If Sergeant Thompson had taught me anything, it was that now we should expect a hail of bullets at any moment.

I did not want to charge through the gap over or through the other men, though I could have done so. Instead, I kept urging and helping them through the narrow place. In so doing I got caught in some low lying tangled ground wire. While getting free of it an illumination rocket went up from the enemy trench, bathing the area in a bright light. I dived into a nearby shell hole. It was none too soon, because bullets began to hit the rim of that shell hole, and small stones, bits of rusty wire, wooden splinters, and dirt showered down on me from the bullet hits above. They kept sweeping that area for some time. I stayed in the bottom of the shell hole.

Our artillery fired a few shells into the area from which their machine guns were firing. The fire then ceased. I then had the problem of getting back to our own trench without being shot by our men. One does not crawl up to his own trench at night without some sort of an announcement: that is if he wants to live. Therefore, I crawled through the rest of our wire and again took cover. I whistled several times and called my name. But until I heard a reply I did not go nearer, and even then they had several rifles pointed at me when I got to the trench.