The Life of an MP of the AEF

Contributed by Bruce Jarvis,  Co-editor of Over There with [M.P.] Private Graham

As an ex-MP myself, I can confirm that there are two categories of MPs: garrison and field. Most people think of the garrison type with their night-sticks and shiny boots, but nearly half of the MP Corps (then and today) are made up of the field type who direct tactical traffic, perform patrols, physical security, and POW escort duties. Of course, after the Armistice most of the MPs transitioned to garrison duty breaking up bar fights, apprehending AWOLs, and harassing soldiers who did not show enough military bearing.  Here is an excerpt from the memoirs of Pvt. William Graham, an MP with 28th Pennsylvania Division, that captures the duties he performed in combat. It's followed by a poem he composed after the war in reflecting on his service in France.

At 4:30 a.m., the artillery was firing. The roaring of the guns was enough to deafen a man. The sky was lit up with flames for miles and miles around. A large fire was burning in a town several kilometers from us. I suppose the Hun set fire to this place before he retreated which is one of his destruction methods...leaves
nothing standing...destroy everything in his path.

After breakfast, I was sent to Courville to patrol a road which passes through a valley leading to the town of Arcis-le-Ponsart. There were quite a number of troops traveling on this road heading for the lines. During my tour of duty, I came in contact with quite a number of boys from the west. All seemed happy and full of spirit although they were going to a place they knew men were being killed and wounded. 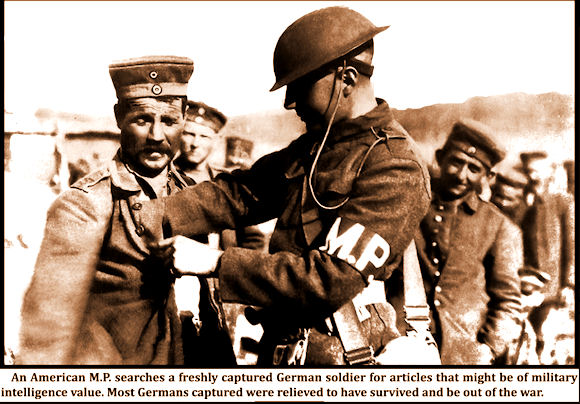 Standing on the roads under shell fire and gas, directing the many thousands of troops to a safe place during the shelling, and never leaving his post of duty...he saw that the other men were placed in a safe and secure woods or dugouts out of harm’s way of the shells...and I have known them to ride the roads in total darkness.

Not as a company but alone…watching and waiting to lend a helping hand to any who may need assistance and how this lone M.P. would strain his eyes and his ears for any sound which was of German tongue concealed in the underbrush along the roadways...always on the alert to sound a word of warning to those he thought might be in danger from shell fire and gas.

No doubt these same boys used to think him (the M.P.) pretty important when he first showed up in the training camps at home or in some base port towns with his brand new M.P. band on his arm and his lordly way of locking up even the Top Sergeant if the top kicks got drunk. Yet he seemed even more important on the outskirts of Chateau Thierry when he appeared to suspect everyone in American uniform of being a German spy (and several good catches were made.) and when his brow was furrowed from his anxiety lest a car carrying a lot of perfectly good officers should take the wrong road and drive innocently into German territory.

But in the Valley of the Marne, in the course of such a mighty drive as the American boys launched therefrom July 15th to the 28th, when the whole success of this battle can be measured and modified by the speed with which the big guns, ammunition and rations were rushed along after the doughboys, when a road tie up could strangle a whole battalion, then does the M.P. rise to his full height and stature. His dominant figure emerging above the sluggish streams of traffic...the effect of his work, for better or worse, is felt from one end of the battlefield to the other.

Play the game boys...obey the M.P.’s...do as you’re told by these men. They know more about the hardships of this war than most of you do...who are just stepping into the fray fresh from the states. Play the game fair and square boys and the M.P.’s will play the game in a square and manly manner with you. We have created a well organized traffic outfit. Every man has stood the test while shells and bombs have been dropped. Not one has been known to leave his post. And, into our hands rest many priceless American lives on the fullness and accuracy of our memory, on the swiftness of our decisions, on the squareness of our jaw. In a battle, many depend on us, so play the game fair boys. Give the M.P.’s credit for what they have done in this...the greatest war the world ever knew.

"The M.P. in France" by William J. Graham

Standing on the road filled with mud,
A field of carnage...a field of blood.
Where the Maxim Guns whine and the big guns roar,
In man’s modern improvement on hell...called war.

#2
He is no hero to look at, that I confess.
Cool and collected, but define less.
But where shots fly thickest, he doggedly stands,
Exposed to the shell fire from the enemy’s hands.

#3
For he gleans the roads where the trucks go by,
Shrapnel and shell piled up high.
And his outstretched hand saves many from death,
The drivers stop and hold their breath.

#4
From sunrise to sunset he’s on the alert,
Unprotected from dangers, but covered with dirt.
His duties performed with rhythmical pace,
Nothing is rushed, everything has its place.

#5
No matter what danger it may be,
Air raids...gas...tis his duty to see,
That the boys are awakened, that everyone’s warned,
That done, he feels satisfied...his duties performed

On many a crimson battle line.
The soldier who wears...the M.P. on his arm,
Is daily a hero, saving others from harm. 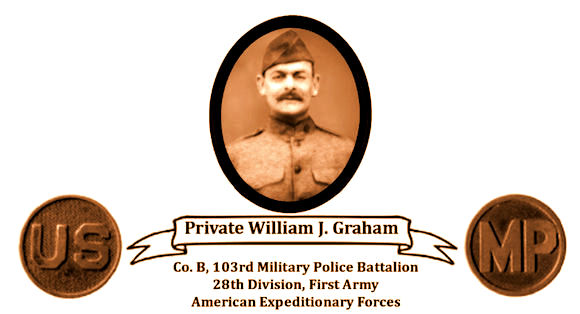 Read our review of Pvt. Graham's Memoir, Over There with Private Graham HERE.