The Cumulative Breakdown of Peace by 1914 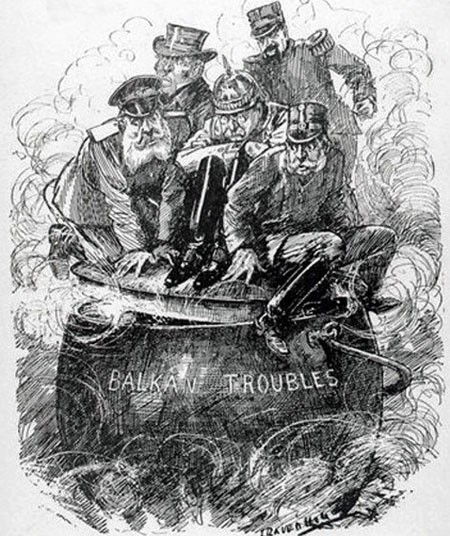 From: "Militarization and Diplomacy in Europe Before 1914," by David Stevenson, International Security, Summer, 1997


By 1914 both Germany and Austria-Hungary and France and Russia were willing to court and, if need be, to accept a general war. The question remains: Where did this willingness come from?

The answer differs at the Balkan and continental levels. As for the first, the Hapsburg monarchy's South Slav problem had intensified for over a decade and peaceful solutions to it seemed exhausted. As for the second, Germany too was drawn increasingly to violent answers to its security dilemmas. With a faltering Austria-Hungary as its one reliable great power ally, it faced encirclement by the British-French-Russian combination. Its efforts to split the latter by diplomacy had failed, and the bonds of solidarity within the two blocs were tightening. Meanwhile the Anglo-German naval race lost impetus after 1912 and a land race between the armies of the Franco-Russian and the Austro-German alliances became the dominant feature of the European armaments scene. The Germans faced both diplomatic isolation and the prospect by 1917 of losing all hope of victory in a general European war, as their internal political deadlock over tax increases was likely to prevent them from raising the revenue needed to maintain their edge over their competitors. A final element undermining European stability was a growing popular awareness of heightened danger, which accentuated patriotic and warlike feeling. Political discourse contained more frequent references to an inevitable "next" war. All three developments—tightening alliances, armaments competition, and popular militarism—interacted after about 1911, and the Moroccan and Balkan crises intensified them.

This role of the crises was crucial. None of the prewar diplomatic confrontations in isolation could have exercised so powerful a galvanizing effect as did a succession of them, following on ever more closely, and each more acute than its predecessor. By 1914 it seemed that great power relations had become permanently more dangerous, and the short-term precautions taken during each crisis were paralleled by an underlying movement toward greater preparedness. The First Moroccan Crisis accelerated French and German re-equipment. The Bosnia Crisis sharpened armaments competition between Austria-Hungary and its South Slav neighbors. In Russia the legacy of the Bosnia Crisis resembled the "Munich complex" evident in the Western powers after 1938, and once tsarist military strength recovered, St. Petersburg was determined never to show such weakness again. As for the Agadir Crisis, it came at a pivotal moment when Russian and French military revival was already leading Berlin toward re-orienting its armaments policy. In the aftermath of the crisis both Germany and Britain began to keep much higher proportions of their battle fleets fully manned and permanently ready for action. But the new emphasis of the vast increase in German military spending that followed 1912 came on land. Finally, the First Balkan War led directly to a succession of major army laws in all the continental powers, directed primarily to raising the manpower of their standing armies and thereby the armies' strength and readiness. The purpose was not merely to safeguard against the danger of surprise attack but also to facilitate crisis management. . .

The breakdown of peace should therefore be seen as cumulative. It is true that July 1914 differed from previous crises because the Central Powers challenged the Triple Entente more radically and the differences between the blocs were harder to resolve by compromise. But the origin of the willingness to take such risks must be traced through the preceding decay in Balkan and continental European stability, to which the earlier crises had powerfully contributed. The prewar shift to more offensive strategic planning. . . must be located in the context of a broader complex of intensifying tension.