Over There with Private Graham: The Compelling World War 1 Journal of an American Doughboy 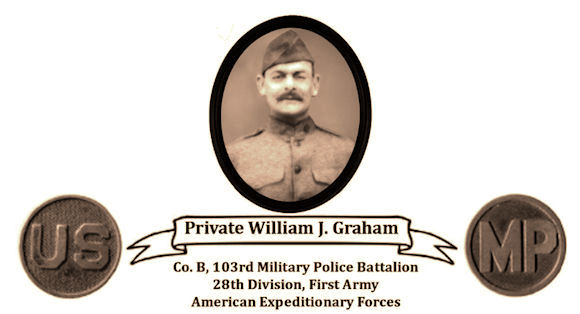 The Centenary of the Great War has spawned a swarm of histories and reprints of memoirs. Over There with Private Graham is a minimally edited account of the journal of Private William J. Graham, an overage volunteer with a Pennsylvania National Guard Military Police Company that was incorporated into the 28th U.S. Infantry Division. A 38-year-old Philadelphia policeman upon enlistment in 1917, Graham served in Europe from May 1917 and continued his service until September 1919 in the Army of Occupation.

The chain of custody of this 660-page hand written journal is a mystery tale in itself. Author Bruce Jarvis purchased a set of unsigned, unbound handwritten double-sided pages. He later recognized quotations from the journal in The Iron Division, National Guard of Pennsylvania in the World War. Some detective work enabled Jarvis to connect the dots between references to the author, Bill, and criticisms of Captain Henry Crofut, leading to Bugler William J. Graham. Eventual contact with Graham's grand-daughter unearthed additional journal entries. 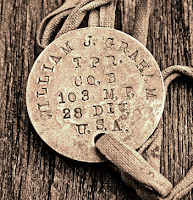 This work commences with a brief biography of Graham who, but for his writings, would have been an undistinguished enlisted man. This is followed by a preface explaining the origins and discovery of the journal. Then comes a stream of consciousness of observations and commentary by an American serving on the Western Front. What makes this tome rare, if not unique, is its unvarnished report of the author's experiences. Having been written contemporaneously with the events it describes, it is free from the bias and reflective changes prevalent in postwar memoirs. Apparently having not been mailed, it was neither subject to nor intimidated by the censor's knife. I find its entries to be rather upbeat with little of the morose tone evident in many first-person war memories. Graham served as an MP, which placed him out of the front lines but close enough to them to have seen the results of action at the front.

Entries generally range from a couple of paragraphs to a page or two. They are generously supplemented by many black-and-white period photographs and leavened by humor or an occasional poem, often written by Graham himself. Throughout, the theme that the Americans were pushing while the Germans were retreating is evident. The entries provide insight into the life of the Doughboys, the phrases they used, their values, the practicalities of the war, and the characters with whom Graham interacted.

Reports of actions describe the sights and sounds and display the enthusiasm of the Americans freshly committed to battle:

October 10, 1918: At 2:30 a.m., the American artillery and the Hun batteries started a bombardment. It was wicked! The roaring of the guns were [sic] deafening. I will make a bet the Hun is coming out second best in this duel. Our boys have the Boche's number when it comes to artillery fighting. The wounded and gassed victims are coming in very fast to the hospital in Fleury. There have been five hospital trains each day this week…At 10 a.m. word came in that the three Marne division are in the lines hammering away at "Fritz" being backed up with our boys, using the French 75s like a machine gun battalion would handle their machine guns (p. 253).

October 11, 1918: I cannot figure out how the Germans can stand this method of warfare which the Americans are serving them. Thousands upon thousands of shells fired from as many guns…day and night (p. 254).

References to the baseball throw of hand grenades, support from service organizations such as the Red Cross, the YMCA, and the Knights of Columbus, tell a bit about the life of the common Doughboy. The anxiety that the war might start again if the Germans did not sign the treaty reminds readers that the Armistice was not necessarily the end of the war and that the soldiers knew it. The creeping fraternization between occupiers and civilians evidenced a gradual easing of tensions as the war receded into memory.


Over There with Private Graham is an oversized book with a cover photo of a Doughboy with helmet, revolver, and gas mask in front of no-man's-land. The entries make for easy reading either straight through or in bits and pieces as they are capable of being appreciated alone or in small groups. The many historic black-and-white photographs supplement the text and convey valuable information on their own. This is not a book for the big story of the Great War. It brings the reader in touch with a real Doughboy. Try to find notebooks of your grandfather or uncle, the neighbor when you were growing up, or the family friends of whom you have heard others speak. Maybe they can speak again to you through words echoing those of Private Graham.