Canada and the Battle of Vimy Ridge

When I selected this book for review I was expecting to read a new look at an old subject written from a bold perspective by a couple of Oxonian or Cantabrigian revisionists. Was I ever surprised! What I received was written by two staff historians at the Canadian Department of National Defence, Directorate of History and Heritage (DHH), to recognize the 75th anniversary of the battle. It also turned out that the perspective isn't modern, refreshing, or revisionist, but it's decidedly Canadian. The authors acknowledge that their primary source was the official Canadian Expeditionary Force, 1914–1919, written under the direction of Col. G.W.I. Nicholson and published by the government in 1962.

Of particular note, Brereton "Ben" Greenhous (1929–2005) was born in the UK, served in the British Army, the Royal Malayan Police and the Canadian Army before earning a BA and an MA from Canadian universities. Although not of high pedigree, he was a serious historian. During his long career at the DHH he produced 11 books, collaborated on over 20 more and wrote 26 articles for the Canadian Encyclopedia, among others. His last work (2002) was The Making of Billy Bishop, a massively revisionist portrait of the Canadian VC holder and WWII air marshal. When promoting this work, Greenhous delivered this sound bite—"Billy Bishop was a very brave man and a very bold liar."

The first 83 pages of the book deal with the formation of the Canadian Expeditionary Force (CEF), which made an indelible imprint on Canadian nation-building, especially among the Anglophones, by the intermingling of men from all parts of the country. Despite the incessant meddling of the politician Sir Sam Hughes, the Minister of Militias (who was finally sacked by Prime Minister Sir Robert Borden in November 1916), the CEF quickly became an effective force, then grew from one division to four, finally grouped as the Canadian Corps.

There was the heroism and distinguished service in engagements in the Ypres Salient, on the Somme in the latter stages of that offensive and then the Corps' first exclusive operation, a victory at Vimy Ridge, a sector of the line where the German defense had withstood two massive French assaults in 1915. There would be much more to come before the Armistice.


The Corps meticulously planned and prepared for the Vimy Ridge assault. The authors point out that the Canadians had certain advantages when serving together:

British divisions were continually being shuffled about within their various corps formations for reasons of immediate military convenience… so there was no standardization or continuity in their armies above the divisional level. The four Canadian divisions … would be held together for the remainder of the war: and other things being equal, a corps consisting of divisions trained by different criteria to different standards was not as likely to do as well in battle as one with divisions boasting a common interpretation of doctrine and similar standards of training. Moreover, because Canadians were kept together their divisional and corps staffs came to know each other's strengths and weaknesses very well, and that made for better, more effective and more effort-free performance all around.

A series of trench raids, some large in scale, were staged by both sides in the early months of 1917. One of these, a two-battalion operation on 1 March against Hill 145 cost the attackers nearly 700 casualties (including both battalion commanders) for a net of 37 prisoners. Afterwards the Germans offered a truce to recover the dead and wounded from the battlefield, in defiance of standing orders issued by both sides, and on the morning of 3 March 1917, soldiers from both sides mingled in the no-man's-land for two hours. Capt. D.S. Elliott (temporarily commanding 73rd Battalion CEF) found himself in conversation with a Bavarian major educated in London who told Elliott "how [strange] it would be to go back to our different lines and pot at one another again." Elliott also wrote, "The whole affair seemed so queer, standing upright out there in broad daylight, without a shot being fired, that it seemed to most of us like a dream."


Vimy Ridge was one of the last old school offensives launched by the British, an assault on line "leaning on the barrage," but with one important difference. The General Orders stated as follows:

In the event of any division or brigade being held up, the units on the flanks will on no account check their advance, but will form defensive flanks in that direction and press forward themselves so as to envelop the strong point or centre of resistance which is preventing the advance. With this object in view reserves will be pushed in behind those portions of the line that are successful rather than those which are held up.

On Easter Monday, 1917, the execution of the plan was good, the soldiers tenacious; the Germans were surprised and outnumbered, their reserves were too far behind the front, and the Corps achieved a complete success, albeit at a high cost for a country the size of Canada. The whole Douai Plain lay below, but there were no reserves to exploit the gain. If only the French had done so well at the Chemin des Dames! 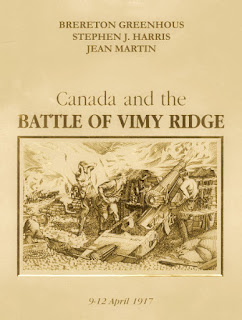 There are plenty of quotes from the journals and letters of soldiers, including in particular co-author Harris's grandfather, brick layer Pvt. Jack Harris, 4th Canadian Mounted Rifles (who weren't mounted). He served with the Canadian Corps from the Somme to the finish and died in 1972. Personal touches were added by these sources, including detail about casualties, terrain conditions, and the weather.

Canada and the Battle of Vimy Ridge is not as much about the battle or even the victory as it is about the emergence of Canada from the Imperial shadow to be a distinct nation, a people that had done great things, just as Underhill predicted. The book is a quick and worthwhile read, if only for the photographs and the aforementioned map. It's a 196-page coffee table book, with ten blank pages at the end, perhaps for writing notes? There are over 125 photographs, most of which I've never seen before, and an absolutely incredible centerfold-style map drawn by a government cartographer. There was only one printing, and the copy that I have was signed by both authors. Nevertheless, the work is still available (as a PDF) from the Canadian Government Publications Office HERE.