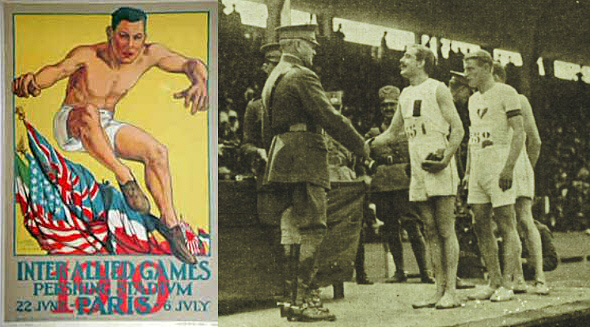 After the Armistice the victorious Allied armies had millions of troops with nothing to do. In the spirit of keeping the men busy and out of trouble and to help them start the transition to civilian life, sports programs sprung up in all the military camps. By January 1919, arrangements were made for a competition in Paris modeled on the Olympics, hosted by American commander General John J. Pershing. Eighteen nations competed in these Inter-Allied Games. For the U.S., sprinter Charlie Paddock and swimmer Norman Ross would be gold medalists at both Paris and Antwerp. Inter-Allied light heavyweight boxing champion Gene Tunney would later defeat Jack Dempsey for the world heavyweight championship. A year later, the athletes and the world were ready for the return of the Olympic spirit, but the war was not forgotten. By one estimate, almost ten percent of the competitors at Antwerp's 1920 Olympiad were veterans of these games.


Of the 24 separate events listed in the program, the U.S. military athletes won first place for their country in 12 events and second in seven more. AEF entrants making clean sweeps of all three places in five events and in a sixth, having three of four men who succeeded in placing. Again in the service shooting events, the AEF was successful with both rifle and pistol, taking four first places. Other first places were gained by the U.S. in baseball, basketball, boxing, prize jumping with horses, swimming, tug-of-war, and catch-as-catch wrestling. America’s notable success in winning first and second places in so many varied events was due of course in no small degree to the preponderance of entries and to the consistent preliminary training, not only immediately prior to the Games but also in numerous athletic competitions fostered in the AEF by YMCA experts who were Army officers before the Inter-Allied Games were undertaken. The concluding ceremony of the Games took place on Sunday 6 July, when the medals were presented by General Pershing, the Allied flags lowered, and the French standard left to float alone over Stade Pershing.