Nine villages were razed during the Battle of Verdun, swept away by the fearsome might of the battle. All that remain are markers symbolizing the outlines of the houses and public buildings. They serve as a reminder of the trades and work of these old village communities that have never been rebuilt. They are ghost villages, villages that laid down their lives for France, and they are a moving memorial thanks to the chapels and commemorative monument erected after the end of the war. While three of the villages were subsequently rebuilt on nearby land and are governed as normal communes, the other six are entirely unpopulated and are managed by a council of three members, appointed by the prefect of Meuse

Eight are on the east side of the Meuse. One, Cumières, is near the base of Mort Homme on the west side. Below are recent photos of each village. By their names are their populations in the most recent (1911) prewar census and an asterisk if they have been rebuilt. 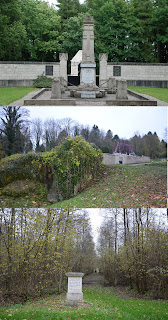 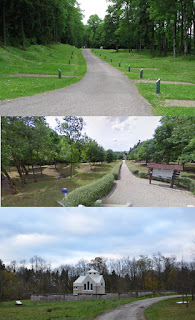 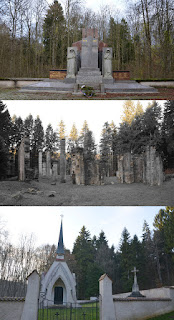