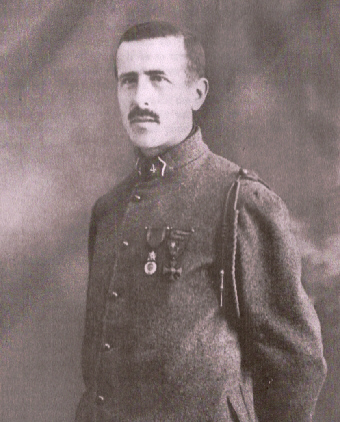 Corporal Pierre Teilhard de Chardin was a controversial French priest, paleontologist, and philosopher who attempted to reconcile original sin, evolution, and human consciousness in arguing that belief in evolution does not entail a rejection of Christian beliefs. During the war he served as an enlisted stretcher bearer with a Moroccan division and was decorated for his courage under fire, earning the deep respect of his mostly Islamic fellow soldiers.  He later wrote of his experience:

The unforgettable experience of the Front, in my opinion, is that of an immense liberty. Those who enter a sector first let drop at the entrance of the first trench bay, the burden of social conventions. At the moment civilian life ends, the difference ceases between day and night. In place of the banal getting up and going to bed, the man in the lines sees only before him one vast trench of unforeseen length where rest and sleep are taken according to circumstances and occasions without well-fixed relation between light and darkness. In the line, one washes when one can. One often sleeps no matter where. All the constraints and compartmentalizations collapse like a house of cards. It is curious to observe in oneself how this overthrow of day-to-day slavery can bring satisfaction to the spirit, a little rebellious perhaps, but just and noble if one understands it rightly.