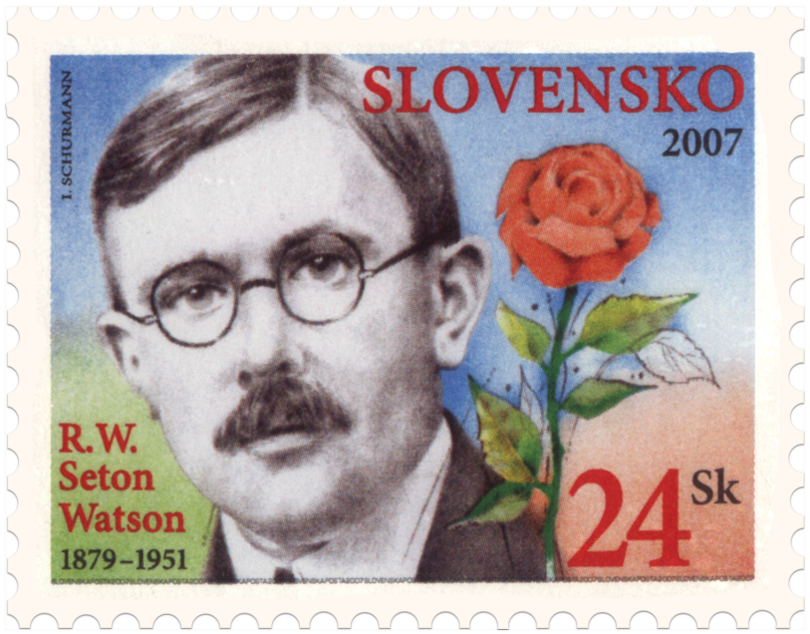 A Brtish historical website I was visiting has this rather bland and understated description of the career of the gentleman depicted on the stamp above. "Robert William Seton-Watson was important as the first British historian of central and southeastern Europe. His historical knowledge also allowed him to influence government policy toward the region at the end of the First World War."

This leaves out much information about Seton-Watson, himself, and what those policies were that he influenced.  Here is what I discovered in some other sources on the web and my own bookshelf.

Seton-Watson was a brilliant academic at the University of London and Oxford, who was wealthy and just despised the Austro-Hungarian Empire. His prewar travels to Hungary led to increased sympathy for the minority peoples of the Dual Monarchy — Slavs, Slovaks, and Romanian. His views at the time were completely out of sync with the British diplomatic community. During the war, he became the principal propagandist for Tomas Masaryk in the west, mostly in a journal he personally financed titled "The New Europe".

At the Paris Peace conference he was able to meet with Woodrow Wilson, despite being on the "outs" with his own government. His friend Masaryk became first president of Czechoslovakia, and Seton-Watson advised on many issues affecting the region, such as helping to settle the border between the new state of Yugoslavia and Italy. He received honors of various kinds after the war from Romania, Yugoslavia, and Czechoslovakia.

He was less influential during the Second World War — the British Government suppressed his publishing — and was saddened when the Iron Curtain came over the countries he had helped liberate after the Great War. He's not forgotten in those places today, as the 2007 stamp above from the Slovak Republic shows, that found freedom after the end of the Cold War and the defeat of Communism.