Prior to the Great War,  Levi Lamb was a star heavyweight wrestler, football lineman, and  track letterman for the Penn State Nittany Lions. Athletically, he is today best remembered as a starting tackle on the undefeated 1912 football squad.  After a few years as a teacher and athletic coach, he volunteered for the Reserve Officers Training Corps at Fort Snelling, MN, and earned a commission as an infantry officer.

Assigned to the 9th Infantry Regiment of the 2nd Division, he fought at Château-Thierry in June and July 1918. He was killed  in action near Soissons  leading his men onward, 18 July 1918,  the opening day of the offensive stage of the Second Battle of the Marne.  In August 1921, at his family's request, Levi Lamb's remains were returned home from France and buried at the Buck Valley Methodist Church Cemetery  in Fulton County, PA.

After the war, Levi Lamb's commanding officer, Col. John Samuel, wrote of him: "The regiment lost a courageous and gallant officer beloved alike by his fellow officers and men. His conduct during the battle, as in former engagements with his regiment, has been of the highest order and an inspiration to all about him."

He has been honored since 1952 as the namesake of Levi Lamb Fund athletic scholarship endowment at his alma mater. 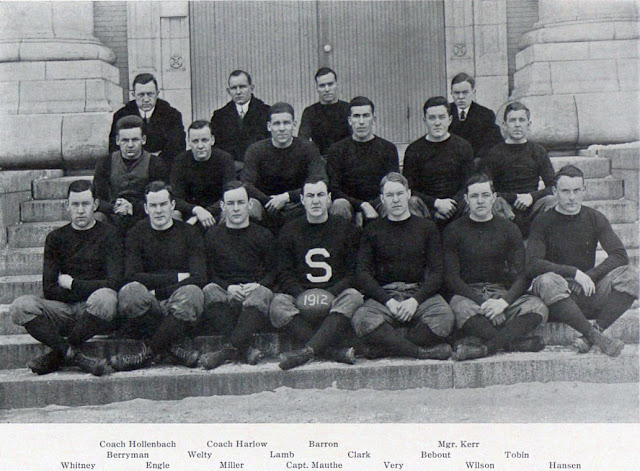 The 1912 Undefeated Penn State Squad; Levi Lamb, 3rd from left, Middle Row
Teammate James "Red" Bebout, 5th from Left, Was Also Killed in the War While Serving with the 4th Division in the Meuse-Argonne Offensive