Albert Schweitzer Reflects Back on the First World War

Albert Schweitzer was a remarkable and world famous French-German theologian, organist, writer, humanitarian, philosopher, and physician, who received the Nobel Peace Prize in 1952.   He focused much of his prize lecture on the First World War.  These are the specific observation about the war that I have extracted from the talk. Naturally the overall theme of the lecture focused on his  hopes and suggestions for pursuing world peace. I hope I haven't taken these remarks out of context. 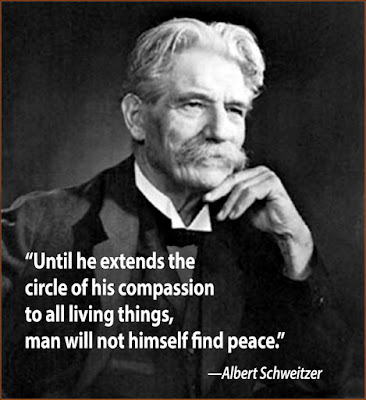 The historical problem of Europe is conditioned by the fact that in past centuries, particularly in the so-called era of the great invasions, the peoples from the East penetrated farther and farther into the West and Southwest, taking possession of the land. So it came about that the later immigrants intermingled with the earlier already established immigrants.

A partial fusion of these peoples took place during this time, and new relatively homogeneous political societies were formed within the new frontiers. In western and central Europe, this evolution led to a situation which may be said to have crystallized and become definitive in its main features in the course of the nineteenth century.

In the East and Southeast, on the other hand, the evolution did not reach this stage; it stopped with the coexistence of nationalities which failed to merge. Each could lay some claim to rightful ownership of the land. One might claim territorial rights by virtue of longer possession or superiority of numbers, while another might point to its contribution in developing the land. The only practical solution would have been for the two groups to agree to live together in the same territory and in a single political society, in accordance with a compromise acceptable to both. It would have been necessary, however, for this state of affairs to have been reached before the second third of the nineteenth century. For, from then on, there was increasingly vigorous development of national consciousness which brought with it serious consequences. This development no longer allowed peoples to be guided by historical realities and by reason.

The First World War, then, had its origins in the conditions which prevailed in eastern and southeastern Europe. The new order created after both world wars bears in its turn the seeds of a future conflict...

It is pertinent to recall that the generation preceding 1914 approved the enormous stockpiling of armaments. The argument was that a military decision would be reached with rapidity and that very brief wars could be expected. This opinion was accepted without contradiction.

Because they anticipated the progressive humanization of the methods of war, people also believed that the evils resulting from future conflicts would be relatively slight. This supposition grew out of the obligations accepted by nations under the terms of the Geneva Convention of 1864, following the efforts of the Red Cross. Mutual guarantees were exchanged concerning care for the wounded, the humane treatment of prisoners of war, and the welfare of the civilian population. This convention did indeed achieve some significant results for which hundreds of thousands of combatants and civilians were to be thankful in the wars to come. But, compared to the miseries of war, which have grown beyond all proportion with the introduction of modern weapons of death and destruction, they are trivial indeed. Truly, it cannot be a question of humanizing war.

The concept of the brief war and that of the humanization of its methods, propounded as they were on the eve of war in 1914, led people to take the war less seriously than they should have. They regarded it as a storm which was to clear the political air and as an event which was to end the arms race that was ruining nations.

While some lightheartedly supported the war on account of the profits they expected to gain from it, others did so from a more noble motive: this war must be the war to end all wars. Many a brave man set out for battle in the belief that he was fighting for a day when war would no longer exist.

In this conflict, just as in that of 1939, these two concepts proved to be completely wrong. Slaughter and destruction continued year after year and were carried on in the most inhumane way. In contrast to the war of 1870 .the duel was not between two isolated nations, but between two great groups of nations, so that a large share of mankind became embroiled, thus compounding the tragedy.

Since we now know what a terrible evil war is, we must spare no effort to prevent its recurrence. To this reason must also be added an ethical one: In the course of the last two wars, we have been guilty of acts of inhumanity which make one shudder, and in any future war we would certainly be guilty of even worse. This must not happen!

The entire lecture can be read here: