One winter day in early 1918 Captain Fiorello H. La Guardia took off from an American training base in Foggia, Italy, under tough wintry conditions. The captain’s subordinates advised against the flight but their pugnacious commander—all of 5’2”—would not hear it; he wanted to be more than just base administrator, to do his share in the air. La Guardia maintained control of his Farman aircraft until wind gusts forced a hard landing on the cold terrain. Thrown from the cockpit, he was fortunate to walk away with only a hip contusion and bruised back. Still, La Guardia never fully recovered from the injuries incurred on that Italian training field. Such incidents were hardly unique in America’s nascent flying corps; every time aviators climbed into their primitive flying machines they knew they were tempting fate. Yet hundreds of American men took that risk. What made Captain La Guardia’s circumstances unusual is that the 35-year-old Signal Corps pilot was not merely an American Army officer but also a member of the United States House of Representatives.

Historians properly recognize Fiorello La Guardia as symbolic of melting pot New York. He was born to immigrant parents in Manhattan on 11 December 1882; father Achille was a non-practicing Catholic from Foggia, Italy, and mother Irene a woman of Jewish-Italian heritage from Trieste, then part of Austria. This hardly made the La Guardias unique; in the decades prior to the Great War there were millions of such families. More unusual was when in 1885 Achille La Guardia became a cornetist in a U.S. Army band. The itinerant life of a military family soon took the La Guardias from the East Side to the Old West. As the man himself attested it was the open ranges of the Dakota and Arizona Territories, not the sidewalks of New York, that most shaped Fiorello La Guardia into the person he became.

This was the decade prior to Frederick Jackson Turner’s declaration of the closing of the frontier, and the open plains naturally captured young Fiorello’s imagination. There was drunkenness, and shootouts, and cold frontier justice. Fiorello later recalled seeing American soldiers go off to chase and subdue recalcitrant Indians. The squalor of the Indian reservations remained with him throughout his life. The occasional playground taunts of “wop” or “dago” also stung, but the young boy with the immigrant parents and swarthy complexion seems not to have witnessed the more traumatic aspects of the period, such as the lynchings of Italian-Americans common in this era just after Reconstruction. The Spanish-American War had a big impact on the family. Fiorello accompanied his father to the American South for embarkation, but neither ever made it to Cuba; Achille suffered a debilitating case of food poisoning in Tampa that ended his military career. Gone was the steady military paycheck, base housing, and all that came with these. Fiorello never forgot the indifferent treatment his father received from the Army once he became expendable. Not content to be a ditch-digger like so many other Italian-Americans of the time, Achille La Guardia took his family back to Europe.

The decade of the 1900s proved crucial in the now-young man’s development. Fiorello spent nearly a decade in Europe, improving his language skills, connecting with the lands of his family, and working civil service jobs. He also grew increasing aware of his own Americanness, conscious that he was a man of the New World, not the Old. Shortly after his father’s death in 1904, Fiorello returned to the United States, entered law school, and in 1907 took a job as an Ellis Island translator. He held the position for three years until passing the bar. His law practice served many of the same types of people he had assisted at the immigration station. In 1916 Fiorello La Guardia ran on both the Republican and Progressive tickets in New York City’s polyglot 14th Congressional District. He took office in March 1917, the first Italian-American ever elected to the U.S. Congress.

Unlike many “hyphenated” Americans La Guardia was a staunch Allied supporter; he was restrained and muted in that support, however, given his many Irish- and German-American constituents. Seniority was everything in Congress, and the first-term Fiorello merely a backbencher. This situation poorly suited his feisty, can-do temperament. Always one to act on what he believed, La Guardia joined the Aviation Section of the Army Signal Corps in July 1917. Overseas he could contribute more—and make a name for himself. Air training in Italy was a natural fit: La Guardia already had some civilian flight experience and his language skills would further help. Plus, officials knew it could not hurt to have a sitting U.S. congressman in the air and on the ground in Italy.

Lieutenant La Guardia and his men soon sailed for Europe, with most aboard commencing flight training in Foggia in October 1917. Training in the Farmans was quite basic; trainees practiced landings and takeoffs, performed figure eights, and similar maneuvers. La Guardia, promoted to captain and second-in-charge to Major William Ord Ryan, also dealt with administrative duties. Sometimes the distinction between “captain” and “congressman” La Guardia blurred. The mid-level officer with a sitting congressional seat found he could get away with things no one of similar rank could have imagined. Requisitions were expedited more quickly and invoices paid with fewer questions. Few captains visited AEF headquarters in France as regularly or were consulted so routinely. Even fewer escorted such VIPs as Assistant Secretary of the Navy Franklin Delano Roosevelt around Italy on their fact-finding missions or were asked to speak in place of Vittorio Emanuele Orlando when the Italian premier was otherwise disposed. Eventually promoted to major, La Guardia was soon speaking—in Italian—to listeners throughout that country, winning hearts and minds in the delicate military and diplomatic milieu that was wartime Italy. And of course he remained an aviator, logging many hours of flight time and flying five missions in September 1918. King Victor Emmanuel III awarded La Guardia and others the Croce de Guerre.

Major Fiorello La Guardia returned to the United States a month later, retook his congressional seat, and in November resigned his commission shortly after winning  re-election. He supported Wilson’s Versailles Treaty and League of Nations. The 1920s were a wilderness period for La Guardia, the conservative mood of the nation not fitting his progressive sentiments. He left Congress and worked in local politics before rejoining the U.S. House of Representatives from 1923 to 1933, representing Harlem’s 16th Congressional District. In the age of Coolidge and Hoover, however, there was little he and his allies could do to effect change. His time came in the depths of the Depression, when he won the New York City 1933 mayoral race. What is more, he had the ally he needed in President Franklin Delano Roosevelt. 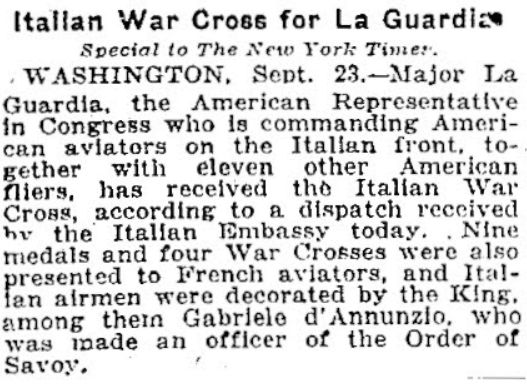 The year Fiorello La Guardia spent int Foggia, Italy—the place of his father’s birth—was  a formative one in his life. In the years to come La Guardia always helped his beloved Foggianni, as the men who served under his command were affectionately called, when they needed something. Until his death in 1947, Major Fiorello La Guardia rarely missed a Memorial Day commemoration at Central Park’s John Purroy Mitchel memorial.