The Legacy of the War on Fiorello La Guardia, Italian-American 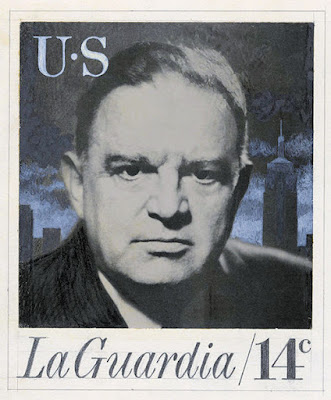 This past April we highlighted the Great War experience of New York’s “flying congressman” Fiorello La Guardia (Here). Today, in recognition of Italian-American Heritage Month, we thought we would return to La Guardia and examine the legacy of the war on his life and work. Major Fiorello Henry La Guardia had a distinguished career in the Aviation Section of the Army Signal Corps and returned just before the war’s end to retake his seat in the United States House of Representatives. For much of the next decade he held a number of prestigious positions, including a return to Congress after a brief stint in local affairs. The Roaring Twenties were a frustrating time for La Guardia, the political mood of the nation not yet having caught up to his sensibilities. His stances against Prohibition, immigration restriction, and laissez-faire economics were just three issues on which he found himself stymied and on the outside looking in.

Through it all the war was never far removed from his mind or duties. La Guardia was president of the New York City Board of Alderman when on 3 July 1921 he spoke in Englewood, New Jersey, at the re-interment of Lieutenant De Witt F. Coleman. A fighter pilot shot down above Vittorio Veneto on 27 October 1918, Lieutenant Coleman was the only American to be awarded the Gold Medal of Valor from King Victor Emmanuel III. Lieutenant Coleman’s stateside funeral was personal to La Guardia, who had once been the young airman’s commander. Emotions aside, La Guardia was a keen aviator who understood the risks inherent in combat and flight itself. Before the war, La Guardia had been a student at the Mineola, Long Island, flying school run by Giuseppe Mario Bellanca. Not surprisingly, La Guardia hit it off well with Bellanca, a Sicilian who had emigrated to the United States in 1911 and opened his Bellanca Airplane School the following year. Intrigued by the possibilities of the still rickety early flying machines, La Guardia even served as attorney and on the board of directors of Bellanca’s concern. He also taught the airplane engineer Bellanca how to drive an automobile.

Fiorello La Guardia was sworn in as New York’s 99th mayor at the stroke of midnight on 1 January 1934 in the depths of the Great Depression. Complicating the economic crisis was the rising threat of fascism in Europe. La Guardia was one of the earliest and most vocal critics of Hitler and Mussolini, and, as he had been two decades earlier during the previous world crisis, La Guardia became an early advocate of American readiness. He was so strident that the mere mention of the mayor’s name at a 1938 Columbus Day event in Manhattan drew boos from some of the 35,000 gathered. There were even shouts from the crowd of “Viva Mussolini” at the mention of Il Duce. La Guardia had been too ill to attend that event, and his absence would have been conspicuous given that he rarely missed such public commemorations. This was especially true not just for Columbus Days but also for annual Memorial and Armistice Day observations, which usually found him crisscrossing the city at the Mayor John Purroy Mitchel Memorial, commemorating the life of his predecessor killed in a flight training exercise in 1918 or in Riverside Park, overseeing a parades featuring not just Spanish-American and Great War veterans but also the ever-dwindling number of survivors of the Grand Army of the Republic.


The second global war that La Guardia so feared came to Europe soon enough. With Europe in conflict once more two hundred veterans of various American wars turned out at City Hall Park on 30 October 1941, days before the mayor’s successful re-election bid for a third term to give La Guardia an American flag and model of the Caproni aircraft he had flown in Italy during World War One. (Lieutenant Coleman had been shot down while flying a Caproni.) After Pearl Harbor La Guardia hoped for a military commission from President Roosevelt, with whom he had worked closely on various New Deal initiatives, but a commission was never forthcoming. Still mayor of New York, La Guardia served unhappily in various national civil defense positions. He found his contribution and voice in broadcasting weekly pro-Allied radio transmissions to the Italian people through the clandestine efforts of the U.S. Office of War Information (OWI) from July 1942 through V-E Day. It was a job to which he was well suited, having occasionally broadcast similar messages—again, in Italian—during his time as an officer in the First World War.

On 17 March 1945 Mayor La Guardia met in City Hall with Alberto Tarchiani, the Italian journalist, Great War veteran, and longtime antifascist forced from Europe into exile in the United States in 1940. Now, near the war’s end, Tarchiani was the first Italian ambassador to the United States since 1941. The two talked about the relations between the two countries, and Tarchiani gave La Guardia a photograph taken in Italy in 1918 of La Guardia and other airmen when the two countries had been allies. The end of the Second World War was a turning point. After a dozen years of confronting economic depression and war, a tired Fiorello La Guardia declined to run for a fourth term and left City Hall at twenty minutes before noon on 1 January 1946.

That spring he was given another formidable task when on 29 March he was appointed Director-General of the United Nations Relief and Rehabilitation Administration (UNRRA). Determined to avoid the mistakes of Versailles, Allied leaders extended an olive branch to the defeated in the Second World War. The work was urgent: millions around the world were facing displacement and food insecurity. President Truman had written to La Guardia’s predecessor, Herbert H. Lehman, on 8 November 1945 that UNRRA’s work was “the greatest and most difficult humanitarian effort ever undertaken.” Humanitarianism aside, it was also good policy in the emerging Cold War. La Guardia worked with his renewed vigor, even leaving his stateside desk, and visiting Europe with a special extended stop in Italy that July and August. He found the graft and political machinations frustrating, but La Guardia helped save countless live. He stepped down later that year. Though just 64, La Guardia was in increasingly poor health from a lifetime of hard work. After a long struggle he died of pancreatic cancer at his home in the Bronx on 20 September 1947 and rests today in Woodlawn Cemetery.

Keith Muchowski, a librarian and professor at New York City College of Technology (CUNY) in Brooklyn, writes occasionally for Roads to the Great War. He blogs at https://thestrawfoot.com.