First in at Gallipoli: The Harrowing Voyage of Australian Submarine AE2 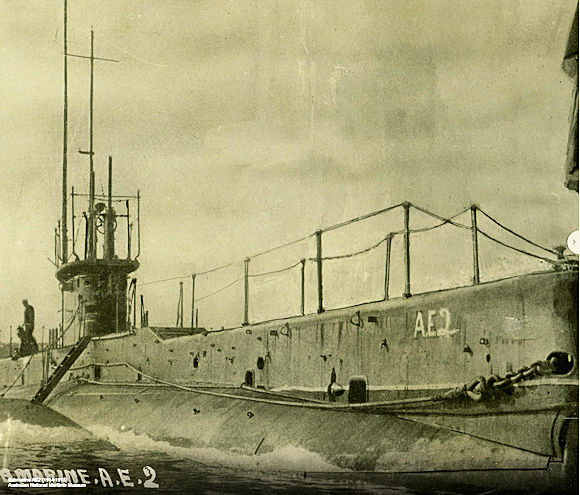 On 25 April 1915 as Anzacs were preparing for their dawn landings on the Gallipoli peninsula, an Australian submarine had already silently made an advance into the Dardanelles Strait.  AE2 was tasked with trying to get through to create havoc among Turkish shipping in the Sea of Marmara and assist with delaying reinforcements from eastern Turkey crossing to the Gallipoli peninsula. The dangers were immense. Several submarine attempts had already failed.

At 4:30 a.m., just as the first wave of Australian soldiers splashed ashore from their boats, submarine AE2 had been creeping past Turkish forts and underwater minefields for several hours.  AE2’s Stoker Petty Officer Henry (Harry) James Elly Kinder later reported "At 6 a.m. the captain remarked that the next few minutes might see us sailing off for Kingdom Come after our halos and wings. . . .we were approaching the place marked on the chart where there were two stationary mine fields, each containing nine rows of mines. Mines are one of the most dreaded things in submarines. It was not pleasant to know that we had to face eighteen rows of them."

Just after 6 a.m. AE2 scraped the first wire. Kinder recalled that "it was enough to stop one’s heart beating to hear it sliding over the steel deck." He kept count of the wires as the boat hit them and "on the eighteenth we guessed we had passed through our first danger." The next thing was to pass the "narrows" with its swift current, banks, shallows and overlooking forts.

At this point, the captain of AE2, Commander Henry Stoker, saw several Turkish cruisers at anchor and decided to "have a shot." But the discharge of the torpedo had affected the vessel’s compass and AE2 was 80 feet under water and running blind. Surfacing to gain bearings was too dangerous, as they were in front of the Turkish forts, but the narrows forced their hand—as the bottom was felt, AE2 rose but became stuck on a bank and surfaced right under Turkish guns. In one sense they were fortunate, being so close inshore that the forts’ guns could not be successfully trained on them. With all the ballast tanks blown and the motor full speed astern, gradually AE2 bumped off the bank. The tanks were again flooded and slowly the vessel sank back down to 80 feet. 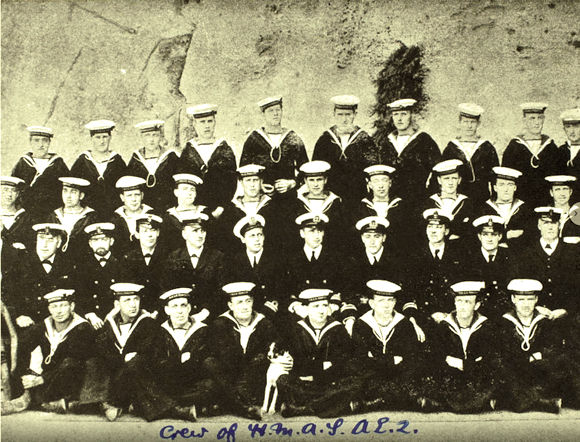 Yet after escaping one side, and still traveling blind, AE2 careened into the opposite bank—again forcing its way off and gaining bearings before Turkish gunfire could target it.

Their luck continued as the compass "became sensible again" and Commander Stoker continued toward their goal of the more open Sea of Marmara. With an array of Turkish vessels desperately searching for it, Stoker decided to rest the vessel on the bottom. It was 8 a.m. on Sunday morning. The crew had breakfast and some sleep, then rose for morning prayers at 11 a.m. Kinder wrote, "I dare say it was the first time prayers were read on the bottom of the sea." Commander Stoker decided to wait for nightfall so they might surface with less risk. Turkish vessels dragged lines searching for the submarine throughout the day. A destroyer passed only a few feet over their position—so close the AE2 crew could "hear the stokers opening the furnace door and shovelling coal into the fires." Toward the end of the day the air inside the submarine was getting thick." AE2 had been submerged for 14 hours and carried no oxygen to renew the air. At 10:30 p.m. Commander Stoker decided it was quiet enough above to continue.

After sitting on the surface and recharging batteries, finally, at daylight on 26 April, AE2 headed into the Sea of Marmara and a sense of security, with open water to escape in. Now, out of the dangers of the narrows, mines, current, forts and depth charges, AE2 was in the box seat.  Brazenly traveling on the surface scaring off local shipping, and turning back transports with enemy troops heading toward Gallipoli. Stoker had been ordered to "run amuck" [sic] if he made it through.

After spending the next night submerged, then scaring off several more transports the next day, Stoker saw an opportunity and fired a torpedo at a transport vessel. Its escorting destroyers then attempted to ram AE2 and as the submarine dived, a destroyer’s propellers sounded so close that "we ducked our heads to allow it to pass." Another night was spent lying on the bottom. Kinder reflected that, "When the boat is lying on the bottom with only a pilot light on, one begins to imagine all sorts of things happening… Perhaps it would not be able to rise again with the crew caught like rats in a trap with no hope of escape. If you let your imagination run too long you can feel your hair rising … Sometimes the sound of a voice is a welcome sound."

Then on 29 April, in a moment of utter surprise and almost disbelief, a British submarine was spotted. E14 had also run the gauntlet in AE2’s wake. The two commanders then agreed to separate and rendezvous the next day. But this meeting was not to occur. The next day, on nearing the appointed rendezvous, two Turkish gunboats and a destroyer were sighted making a bee-line for AE2. When the vessel dived, something was wrong—the boat started to go down by the bow. It was impossible to stand; "everything moveable in the boat started to slide and roll to the bows." Eventually, after all the ballast tanks were blown and with the engines full astern, AE2 began to rise. But circling above were Turkish warships.

AE2 surfaced with a "whoosh," and Stoker quickly flooded the tanks in order to dive again, hoping this time to dive correctly. But luck had seemed to finally desert AE2. Just as it was about to submerge, three shells hit the vessel. Water was flooding the engine room. AE2 descended, and after a hard struggle, the watertight doors to the engine room were closed. The vessel went down to 80 feet and then stopped. Would the flooded engines keep going? Without them AE2 could not surface.  Then AE2 began to rise. Perhaps luck was still with them. But on the surface the crew soon realized AE2’s end had come. While Stoker gave the order to abandon ship, the two gunboats were still firing and shells were falling all around.

Henry Kinder spent his last few minutes looking around the boat. He noticed the clock at five minutes to 12, and recalled there was a rabbit pie in the oven. He left the pie and went to his ditty box to retrieve 16 shillings and a photograph of his wife. On deck, Kinder saw Commander Stoker come up after opening the kingston valves to scuttle the vessel. They then dived overboard with the rest of the crew. For a few seconds Kinder saw AE2 "moving through the water like a big, wounded fish, gradually disappearing from sight." There was only one casualty—a large rat that the cat at Garden Island in Sydney had chased on board one morning when the submarine was lying alongside. The rat took up residence in the engine room and the crew fed him to stop him eating their own food.

AE2 sent a wireless signal through to say the vessel had breached the Dardanelles Strait, and it has been argued that this news had a role in firming the Allied commanders’ resolve to continue the Gallipoli invasion, rather than evacuate in the early stages. The resulting carnage haunted Haggard for the rest of his life, resulting in a long personal silence for this crew member of submarine AE2, the so-called "Silent Anzac."

The AE2, Australia’s second war submarine, was sunk in the Sea of Marmara on 30 April 1915. Torpedoed by the Turkish boat Sultan Hissar, the 32-man crew was forced to abandon ship and all were taken prisoner. Though their captors at first treated them as “honored guests,” the submariners were sent to work on the railway being built through the Taurus Mountains of southern Turkey. In that harsh climate, they suffered from malnutrition, overwork, disease, and brutality. Four died, of typhus, malaria or meningitis.

AE2’s final resting place was located in 1998 by a Turkish dive team led by Selçuk Kolay, OAM. The submarine’s identity was confirmed later the same year by a team of Australian archaeologists led by Dr Mark Spencer and Tim Smith. The initial site survey provided critical information about the submarine’s condition, clarified its historical and archaeological significance, and proposed options for its long-term management.