The Four Chimneys of Verdun 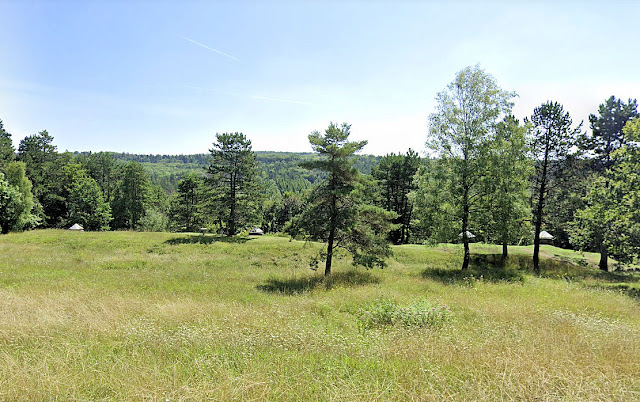 On the left flank of Douaumont, and west of the destroyed village of Fleury of the Verdun battlefield is an elaborate fortification known as Froideterre.  Visitors approaching it by road can see through the the trees on the crest of a nearby ravine four chimneys peeking out of the ground.  These provide ventilation for a large troop shelter for reserve troops.  Built about 1890, the "Four Chimneys" (Fr. Quatre Cheminées) was to be demolished around 1915, but, fortunately for the French, that was delayed when the war broke out.  At the time of the battle it including a brigade headquarters, hospital, and barracks for 350 men.  When the battlefront arrived in 1916 it became an important aid station.

The shelter, consisting of a vaulted double room 60 meters long,  was dug through 8 meters of rock and is covered by 12 meters of dirt.  It was accessed by two guarded entrances on the downside of the hill.

Four Chimneys was bombarded regularly throughout the 1916 battle, but not German shell, even as large as 380mm  penetrated the cover. The living conditions in the gallery, nonetheless were appalling throughout the 300 day battle. Many seriously injured died from poisoning by gas. On 23 June, attacking Bavarian troops reached the shelter, surrounding it.  Unable to get inside, the Germans began dropping grenades down the chimneys, casuing panic with.  This continued the attackers were driven off by fire from Ouvrage de Froideterre about 600 meters away.  The shelter still stands today as testament of the French resistance during the battle.