About Those Chickens in France 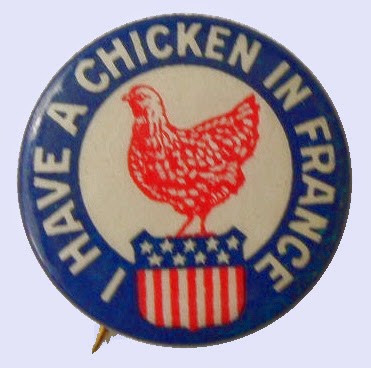 Chickens were apparently on everyone's minds when America entered the war.  Above is an image a pin from the Daughters of the American Revolution. They felt that there was a shortage of chickens in France that would deprive our brave troops of both their favorite main course and eggs at breakfast time. Raising funds to remedy this crisis was one of their pet wartime projects.

On the other hand, Tin Pan Alley had another view on wartime chickens. This was a 1918 "hit" that, I'm sure especially inspired the troops, and — possibly — offended some of the brass.

Would You Rather Be a Colonel with an Eagle on Your Shoulder or a Private with a Chicken on Your Knee?

Once I heard a father ask his soldier son,
Why can't you advance like the other boys have done?
You've been a private mighty long,
Won't you tell me what is wrong?"
And then the soldier lad
Said, "Listen to me, Dad:

I'd rather be a private than a colonel in the Army,
A private has more fun,
When his day's work is done;
And when he goes on hikes,
In ev'ry town he strikes
Girls discover him
And just smother him
With things he likes.
But girlies act so shy
When colonel passes by,
He holds his head so high with dignity;
So would you rather be a colonel with an eagle on your shoulder
Or a private with a chicken on your knee?

You can listen to Arthur Fields sing this classic at:
http://www.firstworldwar.com/audio/wouldyourather.htm