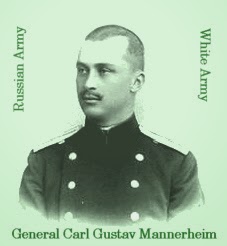 A measure of the importance of C.G.E. Mannerheim to the history of modern independent Finland is the fact that the main boulevard of Finland's capital, Helsinki, is named after him. Mannerheim was a Finn who served in the Russian Army for 30 years, starting in 1887.

Early in his brilliant career, he distinguished himself in the Russo-Japanese War and won the favor of the Tsar's household as Keeper of the Royal Stables. He rose to the rank of Lieutenant General in the First World War when he commanded the VI Cavalry Corps.

After the Russian Revolution he returned to his native Finland as it declared independence. Helsinki was occupied by Finnish communists early in 1918 and in the ensuing civil war, with German help, Mannerheim led the White forces to victory. He served as regent before the first election when Finland became a republic in 1919. The Mannerheim Line of defense across the Karelian Isthmus was subsequently planned by him as a shield against the Soviets.

Later, Mannerheim was a field marshal and became president of Finland in 1944. In 1939–40 and 1941–44 he headed the Finnish forces against the USSR. Finland was forced to capitulate in 1944, and the ensuing armistice required it to expel the German army. As president, Mannerheim was compelled to wage a short, but bloody, war against his former German allies and then reach accommodations with Stalin to maintain a semblance of independence for Finland. Because of his political and diplomatic skills, however, Finland was the only defeated power of World War II that did not suffer occupation. Exhausted by illness, Mannerheim resigned from the presidency in 1946 and died five years later.