Either of these books would make a splendid Christmas gift for anyone with an interest in the Great War, but before buying and giving one or the other be sure you know the interest level of the recipient. Don't go by the titles alone because, although they are excellent books, they are not both for the novice Great War student.


The Smithsonian's Definitive Visual History is by any reckoning a large, impressive volume of the "coffee table" type, measuring some ten by twelve inches. It's over 350 pages are crammed with glossy pictures, photographs, posters, maps, plans, timelines, and text, all presented in year-by-year chronological order. It's a perfect book for the visually inclined newcomer to the war, both adults and young people.

That the book is a history of the war is reinforced by its subtitle, From Sarajevo to Versailles. Its seven sections lay the plan out neatly: 1. The Troubled Continent 1870–1914, 2. Not Over By Christmas 1914, 3. Stalemate 1915, 4. Year of Battles 1916, 5. Revolution and Disillusion 1917, 6. Victory and Defeat 1918, and 7. Aftermath 1919–1923. Each section is a visual feast of graphics with numerous boxes delineating dates of events or other information (often in rather small fonts). Many topics are covered in colorful two-page spreads, such as the Canadian troops (see below), the Brusilov Offensive, the Zeebrugge Raid, and the Arab Revolt. All these glossy visuals show DK Publishing at its very best, but it might be hard for some readers to absorb all the information contained in them. 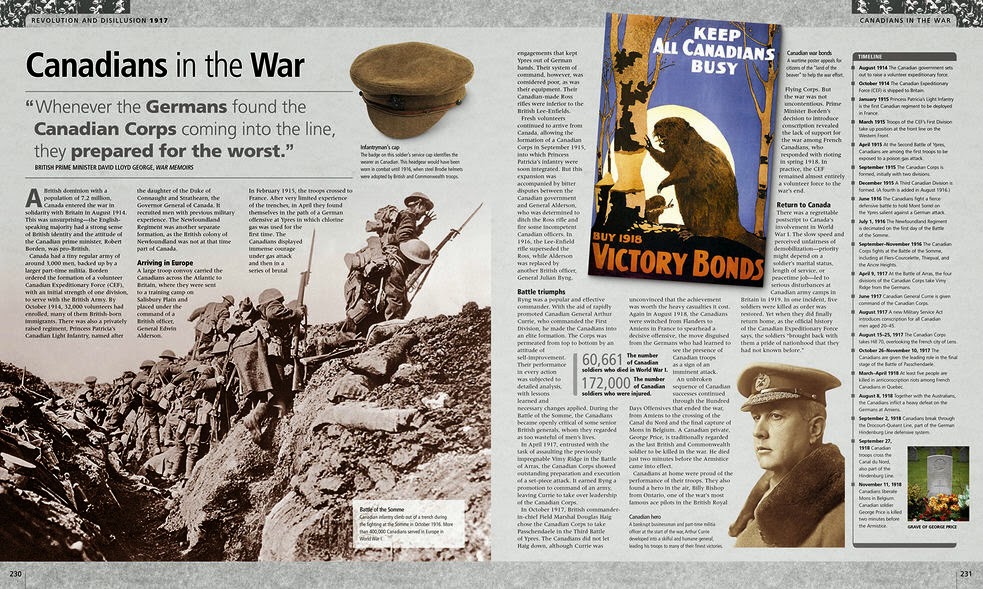 Fortunately the book includes a full index, preceded by an impressive In Memoriam section listing and describing the cemeteries, memorials, monuments, and museums found today in the combatant countries. You should be prepared to spend a lot of time with this book, whether you dip into it intermittently or hunker down with it from beginning to end. Either way, you will gain a world of basic knowledge on virtually every aspect of the Great War

Hew Strachan's new edition of The Oxford Illustrated History of the First World War is not strictly an illustrated history of the war. At about half the size of the Grant volume, it's a collection of 24 essays by leading scholars on different aspects of the war. These essays are accompanied by relevant photographs with a section with 24 independent color plates. The essays follow the general timeline of the war to a certain extent, but since each is an independent effort, no sense of transition is present. We don't get a chronological feeling for the war's unfolding events. What we do get, however, is a collection of thoughtful, scholarly approaches to specific topics that readers should already have some interest in and which they wish to explore more deeply or from a different angle. This book is certainly for them.


The first edition of The Oxford Illustrated History was published in 1998. In his 2014 introduction Hew Strachan describes how fresh illustrations have been added to the current text and four chapters by new authors have been added, three of them replacements for older chapters. A brand-new addition is the penultimate chapter by Robert Gerwarth, who looks at one direction WWI research has taken since 1998.

Many of the authors are familiar, such as Dennis Showalter, who in Chapter 3 addresses 1914–1915 Eastern and Western Front tactics, Paul Halpern, whose Chapter 8 describes the war at sea, and J. M. Winter, who looks at wartime propaganda in Chapter 16. The editor himself has contributed a fine essay on "Economic Mobilization: Money, Munitions, and Machines" (Ch. 10). A few essays provide more sense of historical movement than others, such as Donald Trask's look at America's entry into the war (Ch. 18) or Tim Travers's description of the Allied victories in 1918 (Ch. 21). Others form brief histories within themselves. Richard Crampton covers the war in the Balkans from 1914–1918 (Ch. 5), and Susan Grayzel (Ch. 11) looks at the role of women throughout the war. The final chapter by Modris Eksteins deals with memory and the Great War.


An extensive index allows us to go to specific subjects or subtopics within the chapters, and as noted above, each essay contains several relevant and interesting photographs. Strachan's introduction to the anthology considers the war as global, total, and modern and also briefly looks at the direction, purpose, and length of the war. He makes an important distinction between those scholars who wrote on the war for its 50th anniversary and those who now write at its Centennial:

None of the spate of volumes produced for the fiftieth anniversary of the war was based on serious archival research, for the excellent reason that the war's archives were still closed. Subsequent scholars, including those who have written chapters in this book, have not-at least in most cases-been so handicapped. (p. 10).

Today's researchers are fortunate indeed to have so much more material available to them. Fortunate also are the rest of us to have books such as these two available to us — one an impressive visual history and one a collection of essays by those who devote their time to serious and in-depth study of the war.