From Marne to Verdun: The War Diary of Captain Charles Delvert 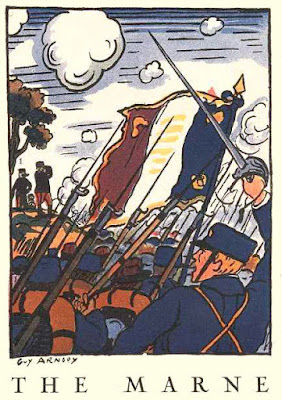 Charles Laurent Delvert (1879–1940) entered the French Army in 1899 as a one-year volunteer in an effort to complete his military obligation early and decrease the time spent in the army from three years. After the year, he was released to the reserves for a period of 12 years followed by seven years in the territorials. He maintained his association, rising through the reserve ranks and receiving a commission in 1912. Between 1900 and 1914 he attended two autumn maneuvers, one in 1902 the other in 1912. When the war started, Delvert was called to command the 2nd Platoon, 4th Company, 101 Infantry Regiment, 7th Division. He began his diary on the train platform as his regiment left Paris and kept it until demobilization in March 1919. The diaries are extensive and produced three books of his authorship and a number of books by others whom Delvert accused of adding dramatization when none existed. This work covers 7 August 1914 to June 1916.

From Marne to Verdun is an infantry soldier's diary arranged in daily fashion. There are descriptions of duties and the problems in dealing with the men, but most illuminating are the personal notations. Those notations are highlighted by footnotes written after the war which go into detail about the event or persons and offers scathing criticism in a spirit of anti-war. First encounters with the Germans in Belgium are of interest. The entries show how the attitude of à outrance resulted in needlessly high casualties. Of note was an incident where two battalions of the 130th Infantry Regiment were nearly annihilated in just a few minutes. One battalion was caught eating a midday meal while the other was ordered to charge entrenched machine guns without artillery preparation.

Delvert lamented the fact that the battalions had no idea of whom or what they were facing. In his early entries he complained about the lack of reconnaissance and heavy artillery, noting that the Germans were far better prepared for war. Cavalry, the source of information, was nowhere to be found, hence the unpreparedness of one battalion, while heavy artillery had been eschewed in favor of the more mobile 75mms during the previous years. The 75s had a flat trajectory which made them nearly useless for indirect fire or in dealing with fortifications. The Germans could stand off hidden behind hills with their howitzers and pound both soldiers and artillery without risk to themselves.

There are also comments about morale. French Army regulations required that territorial and reserve units had to be commanded by line officers. Those line officers looked down on their reserve fellow officers as inferior (Delvert also mentions that his peacetime training was totally inadequate) lacking a clear sense of any military situation and telling them numerous times just how inferior they were. Consequently, decisions were reached not by consensus but by the will of the commander.

Additionally, reserve officers were not considered for decorations or promotions until the line officers received theirs. The attitude was that the war would be short and line officers would have a career after. This attitude did not change as the war progressed and the line officers were killed off. Delvert also states that the soldier was considered merely as a means to an end. Line officers very rarely consider their needs. These themes repeat themselves throughout the diary. Verdun, where Delvert commanded a company on the west of Fort Vaux, is a real eye-opener.

French artillery shooting was blind. The artillery commanders refused to send forward observers to direct shots, and the areas occupied by French forces were unknown because of the constant attacks and counterattacks. The result was that French artillery was more deadly to Delvert's men than were the German cannons. He was constantly shooting up green flares to tell the artillery to lengthen their range. Within a day he ran out of green flares. Delvert had had no idea just how precarious his company's existence had been until he reported to the battalion after relief where he found out that he and his men had been written off. The commander hugged him and treated him like a long-lost son, marveling at his survival.

From Marne to Verdun is an excellent book. We have very few translated French experience books available and this is one of the best, as evidenced by the many works which used Delvert's entries to their own purposes. I can find little fault in his entries, although those which are made while not under fire do get a little flowery. One of the things I found most interesting was his description of the men commanding him and the men he commanded. A reader could almost draw composites of the soldiers, it is so complete with heights, physical stature, eye and hair colors, and foibles. I cannot list all the things that I found so interesting.