Recently, we presented an announcement on the exciting news of the first flight this coming May of the restored DH-4 combat aircraft at Bowling Green, Kentucky. ARTICLE It has been pointed out to me that our announcement included a teensy-weensy overstatement when we wrote that the DH-4 Liberty “was the only US-produced aircraft to fight in WWI.”

It turns out that statement was only true for the U.S. Army.  The U.S. Navy also flew combat missions during the Great War flying US-built Curtiss Flying Boats.  WWI Centennial Commissioner Jack Monahan reminded us  that not only did the Navy fly anti-submarine and rescue missions out of European bases in Ireland, England and Brest, but it also defended our homeland  against the only attack that resulted in enemy detonations on American soil. Jack sent the following report on the action, remembered as the Attack on Orleans, Massachusetts.

On the morning of July 21, 1918, German submarine U-156 surfaced three miles off Orleans, captained by Richard Feldt, and fired its two deck guns at the town and at the passing tugboat Perth Amboy, which had four barges in tow. Perth Amboy was heavily damaged, and the four barges were sunk.[1] Some shells landed harmlessly in a deserted marsh and on Nauset Beach, giving the township of Orleans the distinction of being the only spot in the United States that received enemy fire during World War I, but there is no evidence that these were deliberately aimed at the shore. There were no targets of value in the area other than the vessels. There were no fatalities. 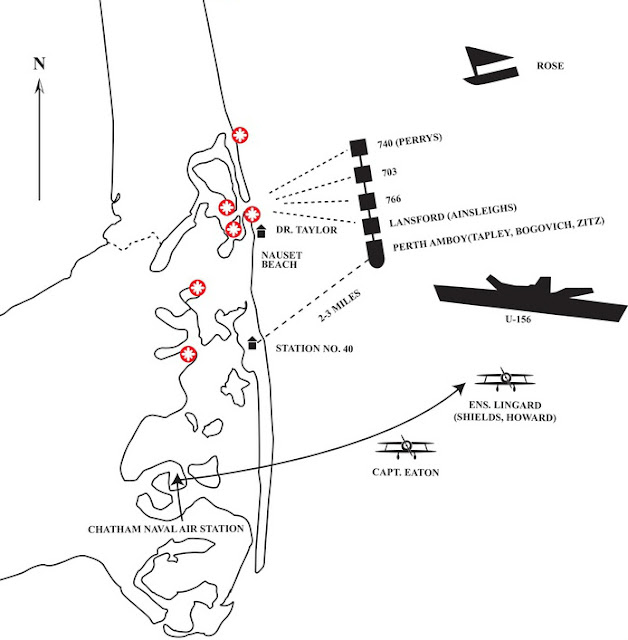 Nearby Station No. 40 of the United States Life-Saving Service launched a surfboat under heavy enemy shellfire and rowed out to rescue the 32 sailors trapped aboard the tug and barges. US Navy Curtiss HS flying boats and Curtiss Model R bombers responded from Naval Air Station Chatham, and they bombed U-156 without success.