Flight of the DH-4 Liberty: A Major World War One Aviation Event

On 16-17 May 2020 in Bowling Green, Kentucky (KBWG), the first public light of the ONLY U. S.- produced aircraft to fight in World War I, the DH-4 Liberty, will be witnessed by the general public. The aircraft was restored "to honor and remember" all American aviators who have flown during and since WWI, and will do so this Armed Forces Day. The stage will be set for dignitaries from America, Britain, and France to commemorate the famous first flight photos and newsreels of 1918 taken in France over a century ago. Then, after flags of America, Britain, and France are removed from the cowling, the Liberty plane will start its large V-12 400-hp engine and take to the skies. 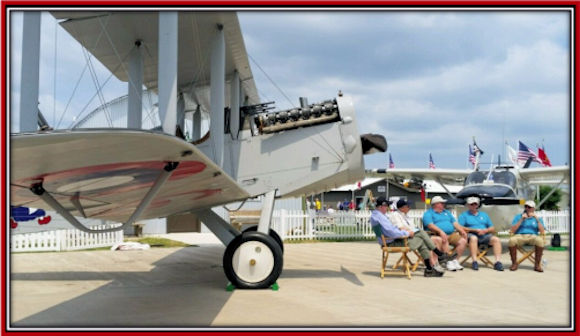 BACKGROUND
Deep in the annals of time and history is a story of American ingenuity, determination, courage, and achievement that is waiting to be brought back to light. The restoration and first flight of America’s first warplane, the 1918 DH-4 Liberty plane embodies this mission. Without the DH-4, tomorrow’s missions to the Moon and Mars; last century’s overnight mail service across the country and across the globe; air-to-air refueling; supersonic fighter jets; and massive bombers would have been inconceivable. It was the innovative minds in the early 20th century who elevated man in flight and who prepared for victory in the skies above. The DH-4 Liberty plane represents the aerial challenges, breakthroughs and achievements, and focuses on the story behind the first American aeroplane that fought for freedom and the first American test pilot, a Kentuckian, who flew it on the battlefront. A century later, it comes full circle with the restoration and maiden flight of the only remaining original airworthy 1918 Liberty plane. But it is not just about the first flight, it is also about the people behind these  achievements. True American heroes. True Kentucky heroes. Please join us in this important and commemorative celebration.