Who Was General John Hines? 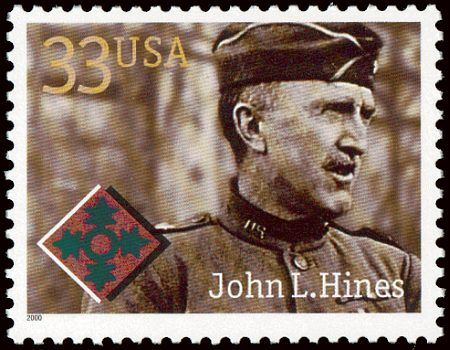 
John Leonard Hines was born in White Sulphur Springs, West Virginia, on 21 May 1868. He graduated from the U.S. Military Academy in 1891, commissioned a second lieutenant, and assigned to the 2nd Infantry. Hines performed troop and staff duties on the frontier in Nebraska and Montana from 1891 to 1898.

After serving as acting quartermaster of the 2nd Infantry in the Cuba expedition and participating in the famous action at San Juan Hill, he filled a number of quartermaster positions in the U.S., Cuba, and the Philippines and served as a military representative in Nagasaki, Japan, where in 1908 he crossed paths with his future mentor and champion, John J. Pershing. In 1914 he was assigned under Pershing, then commander of the 8th Infantry Brigade at the Presidio of San Francisco. Pershing’s brigade was subsequently deployed to the Mexican border and Hines served as the adjutant of the Punitive Expedition into Mexico (1916–1917).

The United States entered World War I while Hines was serving at Governors Island, New York, and Pershing quickly invited him to join his initial entourage to travel to France and plan the expeditionary force. They sailed on SS Baltic in June 1917. His first assignment was as assistant quartermaster of the AEF, but when Pershing asked what he wanted to do, Hines requested a combat command. His rise from that point was nothing less than meteoric. Recently promoted to lieutenant colonel, by October he was colonel commanding the 16th Infantry.

The following April he was promoted to brigadier, commanding the 1st Brigade, 1st Division, at Cantigny and Soissons. Impressed with his work, Pershing then gave him another star and command of the 4th Division during the St. Mihiel Offensive and the opening stage of the Meuse-Argonne operation. Hines’s greatest moment, however, was yet to come.

With his expeditionary force expanding explosively, Pershing delegated command of the U.S. First Army to Hunter Liggett and named Hines commander of its III Corps. Liggett needed to reorganize the First Army—which was bogged down in the heights around Romagne and Cunel—on the fly.

Having served with Hines in the 1st Division, Liggett knew of his quality and was confident enough in his abilities to entrust Hines with a critical role in the last stage of the Meuse-Argonne Offensive.  In early November 1918, III Corps forced the River Meuse at Dun-sur-Meuse and flooded across. This reoriented the main axis of attack of the entire AEF, creating an immediate threat into the Rhineland, thus setting up the further campaign to force Germany from the war. Had the war continued, Hines surely would have played a large role in the anticipated offensives—but the Armistice came.

John Hines is most remembered today as the fastest rising officer of the American Expeditionary Force. He was promoted from major to lieutenant colonel in May 1917, then to colonel, brigadier general, and, in August 1918, to major general—four grades in 16 months, assuming successively larger commands—from regiment to brigade, division, and, finally, corps. Hines served the U.S. Army with distinction for more than 40 years in a full range of line, staff, and combat positions, and he inevitably advanced to the highest position in the Army when he succeeded General Pershing as chief of staff in 1924. He died on 13 October 1968, at the age of 100.

In 2000, your editor Michael Hanlon was asked to be a historical consultant for the U.S. Postal Service on a series of commemorative stamps honoring Distinguished American Soldiers. Alvin York and John Hines (stamp shown above) were the World War I selections. This article is taken from some of the material he developed for that project.