Ace of the Black Cross 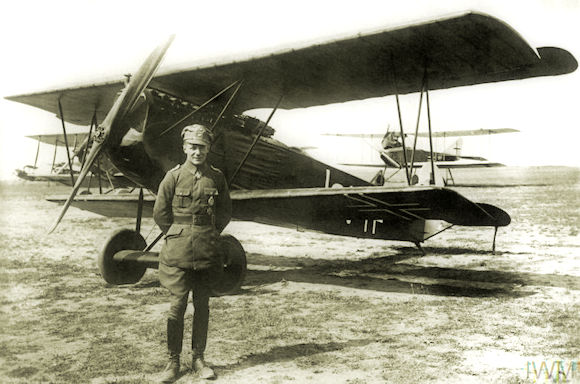 Ernst Udet with His Fokker D.VII
We have been treated to a wealth of aviation memoirs and biographies over the centennial of the First World War. Ernst Udet was the second-highest German ace of the war with 62 victories (to von Richthofen's 80). This new release of Udet's classic by Frontline Books is his memoir describing his flying in the war and afterward in China, South America, Africa, and the United States. I first encountered this book while searching for German instances of battle fatigue, which none of the earlier German pilots wrote about. Udet's experiences, however, were life-like and revealing.

Ernst Udet was born in Frankfurt but moved to Munich, where at age 13 he helped found the Munich Aero-Club. In 1914 he tried to enlist but was turned down because of his short stature. Undeterred, he took private flying lessons and was accepted in the German Air Service in 1915 as an enlisted pilot. By January 1918 he had 16 victories and was asked by Manfred von Richthofen to join Geschwader 1 and command Jasta 11, von Richthofen's old squadron. With the target-rich environment of 1918, Udet's victory count continued to climb, peaking in August, when he downed 20 Allied aircraft. Two final downings in September brought his total to 62.


Udet lived through the war and became an acrobatic pilot at airshows and races and starred in several movies, traveling all over the world. He even came to Hollywood where he became the darling of the stars. Four later films and a video game feature his role in aerial combat.

In 1935 he published this memoir, and it sold over 600,000 copies the first year. You will enjoy this book. Udet's writing style is informal, as if you were sitting in a pub with him, having a drink together. His memoir is very informative about life in the fighter squadrons; I'd compare it to Cecil Lewis's Sagittarius Rising, Ian Mackersey's No Empty Chairs, and Peter Kilduff's Iron Man: Rudolph Berthold. Richard Overy's introduction gives additional facts about his later sad life under Hitler and Goering. This work is a great companion to Lance Bronnencant's Blue Max Airmen, Volume 15, which is dedicated to Udet.