Football in a Time of Pandemic: The Nittany Lions in 1918 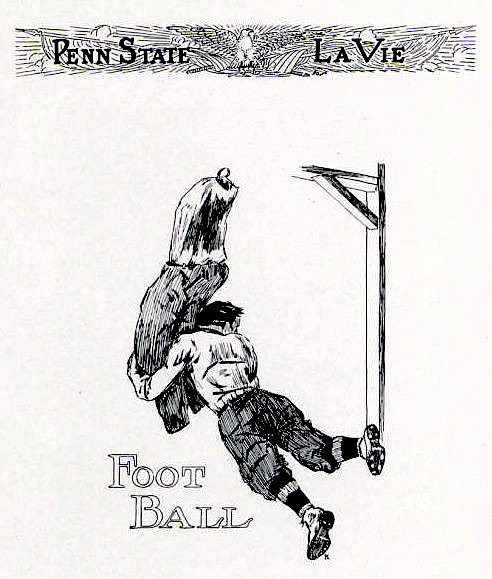 Having been a fan of my college's football team for over a half century, I have been VERY  annoyed recently over the Big 10 (you know, the conference that can't count; it actually has 14 teams) decision not to play football this year. This means for the first time since my undergrad days  I will not be able to follow my Penn State Nittany Lions throughout the fall.

I first thought that I might be able to fill this gnawing gap in my life by vicariously temporarily adopting another program. Being a former USAF veteran and 90-day Wonder, my first candidate was the Fighting Falcons of the Air Force Academy, but then I discovered they only planned to play two games in 2020.  I next auditioned the LSU Tigers, because they're the defending champions and lions and tigers are sort of cousins. Then, however, it dawned on me that I needed some school with a substantial and positive connection to Penn State. The "positive" part of that ruled out the two Pennsylvania school that is playing this year, Temple and the University of Pittsburgh. Believe me, though, those folks really, really hate Penn State.

After a nationwide search of the limited number of colleges that are playing football in 2020, I could only come up with one final candidate—the Kansas State Wildcats. What do the two schools have in common, besides feline mascots, you ask? Well, there are two other connections, one weak, one strong. Both are land grant colleges, but that's not unique amongst the teams that are being allowed to play this year. The strong connect is Milton Eisenhower, one of America's greatest educators.  Ike's brother was a trans-formative president of both universities and was a hero of my favorite Penn State professor, Earl P. Strong. Most important, upon arriving in State College, Dr. Eisenhower encouraged the newly hired head football coach, the great Rip Engle, who had brought along an assistant from Brown named Joe Paterno. The one time President of Kansas State University, therefore, is strongly linked to the next 70 years of rarely crappy, usually pretty good, and sometimes great Penn State football.

So, for a week, or so, I really tried to absorb the power of the Kansas State purple, reading about  recent Wildcat squads, the team's 2020 prospects, learning the lyrics to the "Wabash Cannonball," and so forth.  Sadly, it did not take. I found I could not pledge allegiance to a school I've never attended or even visited. Finally, after wandering the football desert for over a week, in my slumber I dreamed one night I found myself back in State College, Pennsylvania. But I must have tripped over Mr. Peabody's Wayback Machine somewhere, because the only building I recognized was Old Main, and all the students were in army uniforms. I asked on of the cadets what year it was. He replied, "1918, Sir!" And then I asked, "Is the football team, playing this year?" "Damn right, sir," he replied, "as soon as this Spanish flu gets behind us." When I woke, I decided my vicarious team for the 2020 football season would be the 1918 Penn State Nittany Lions.  Researching that season, though, turned out to be a challenge.

This is what I've discovered about that immortal squad since I've awakened. The Penn State Collegian (Penn State’s student newspaper at the time) didn’t issue any copies between May 1918 and December 1918, so I've had to draw on other sources. Incidentally, the Collegian triumphantly returned on 8 January 1919, with a headline reading, “College Assumes Normal Aspect,” 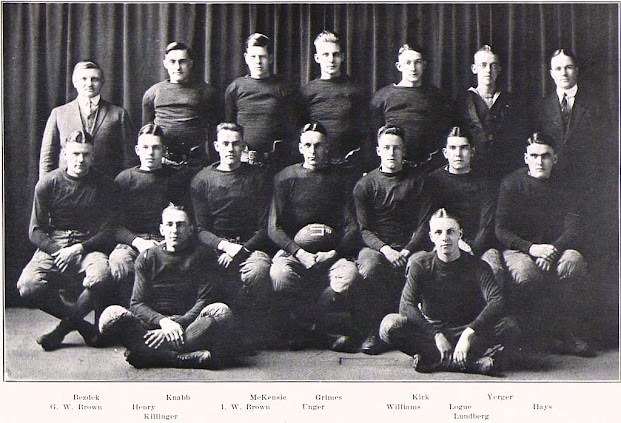 An April 2020 Article from the York, PA, Record sets the stage nicely:

Penn State had nine games scheduled in 1918, but the combination of World War I and the Spanish flu pandemic compelled the cancellation of five games. The nine originally scheduled 1918 football opponents were: Muhlenberg, Gettysburg, at Washington and Jefferson, at Dartmouth, Lebanon Valley, at Cornell, Rutgers, at Lehigh, and at Pittsburgh. However, by summer, Penn State’s entire varsity football team had enlisted in the armed services, including head coach Dick Harlow. The same happened at many other colleges, such that several schools canceled football outright.

The War Department heavily encouraged intramural sports at colleges, since they found one-third of draftees were being rejected as physically unfit. They also encouraged intercollegiate sports to continue, if at all possible. Penn State decided to move forward with football after they hired future Hall of Famer Hugo Bezdek as Director of Massed Athletics, with him also taking on the job as head football coach. 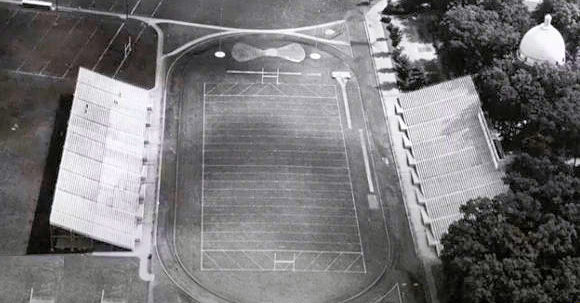 Penn State’s opening day home football game was called off with the news: “There will be no football at Muhlenberg College this fall. This announcement was made last night when the game scheduled with Penn State was officially called off. The changed conditions created by the new draft law caused the decision to give up football.” The following week’s home game against Gettysburg College was canceled for the same reason, though Gettysburg fielded a team later in the season. The away game against Washington and Jefferson was canceled as a precaution by health officials, due to the extent of Spanish flu in the Pittsburgh area.

The away game against Dartmouth, in New Hampshire, was canceled since the travel distance exceeded maximums specified by health officials. However on that Saturday, 19 October, Bucknell was available for a short trip to State College. The football teams were suiting up in their locker rooms, when health officials made the call canceling the game. Likewise, a home game the next Saturday against Lebanon Valley was canceled. Cornell had already made the decision to cancel its game, hosting Penn State at Ithaca, New York, on 2 November, prior to travel restrictions being relaxed.

The Student's Annual La Vie for 1918 seems to provide the only details on the season as it was played out that have been preserved. 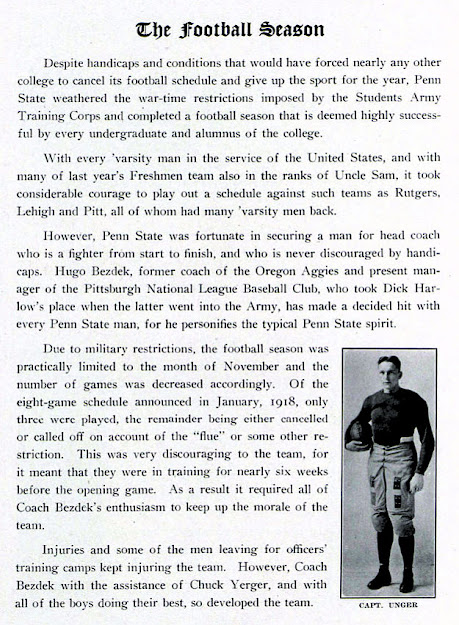 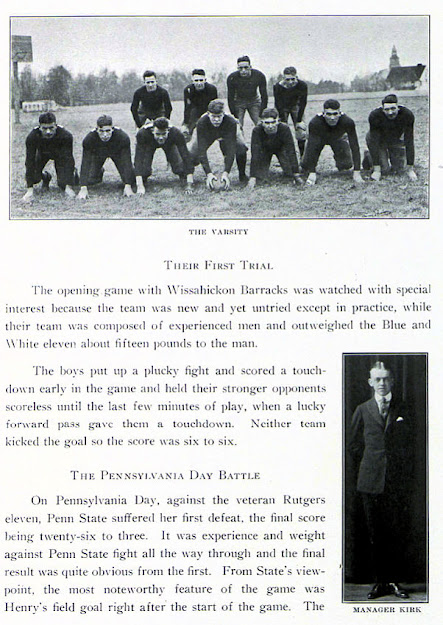 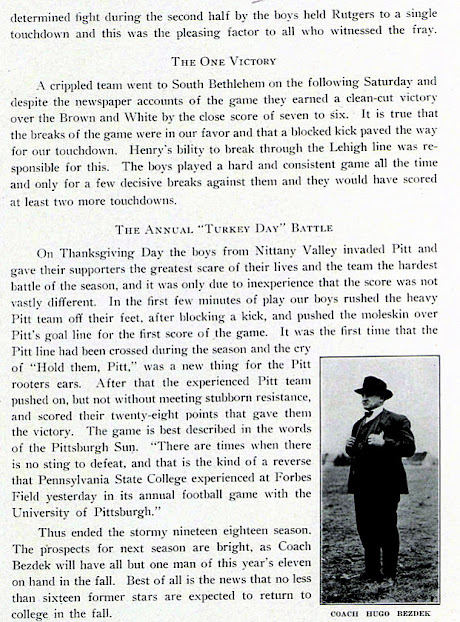 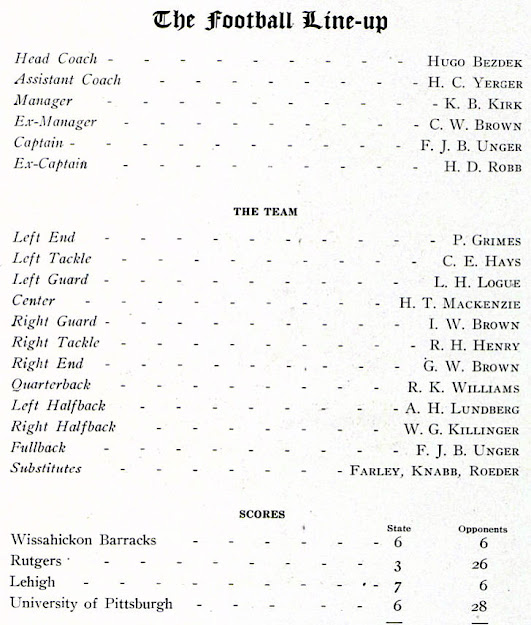 Well, 1-2-1 is not an impressive record by any means. The tie with a bunch of sailors and the loss to Pitt are especially galling. But, as James Coburn's character said in Hard Times: "After playing and winning, next best is playing and losing." There was one notable freshman on the 1918 Penn State Squad.  Glenn Killinger doesn't appear in any accounts of the games, but he would go on to be an All American halfback in 1921 and future member of the College Football Hall of Fame. He would be a key player in the 30-game undefeated streak for Coach Bezdek's postwar Nittany Lions. The most famous opposing player was Rutgers's All-American End Paul Robeson, future gifted show business performer and ardent Communist.