The arrangements for the surrender of Germany's major ships and submarines stipulated in the Armistice agreement of 11 November 1918 were highly complicated. Grand Fleet commander Admiral Sir David Beatty and Vice Admiral Franz Ritter von Hipper, commander-in-chief of the German High Seas Fleet, depended heavily on radio communications to effect the transfer of the ships. Correspondence began on the day of the Armistice and continued until the 24th of November. The surrender itself, designated Operation ZZ, took place on 21 November 1918.

First, Admiral Beatty needed to alert the fleet that an Armistice had been signed. 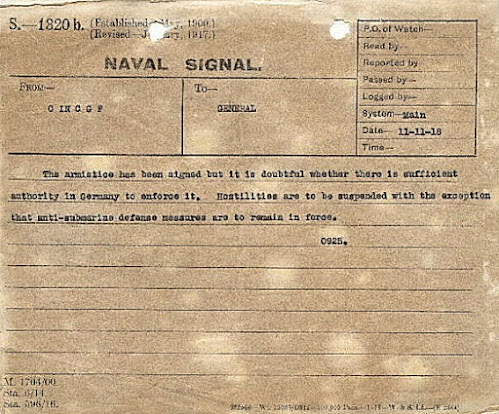 [Message:] The armistice has been signed but it is doubtful whether there is sufficient authority in Germany to enforce it. Hostilities are to be suspended with the exception that anti-submarine defense measures are to remain in force.

Next came some odd signals from Germany

[Message:] Nauen wireless station in the hands of the soldiers and laborers council. Please send us your latest news.

[Message:] At 1020. Monday morning the Prime Minister made the following announcement: The Armistice was signed at five this morning and hostilities are to cease on all fronts at eleven this morning."

The next day, the two admirals finally connected:

[Message:] In order to arrange details for giving effect to terms of Naval Armistice suggest you send a Flag Officer, authorized as necessary, in Light Cruiser to a rendezvous will then be given. Reply on eight hundred metres. AR.

FROM - C IN C GRAND FLEET

On 13 November, the process seems to be getting under way: 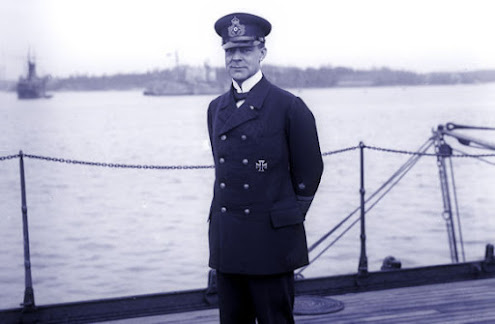 [Message:] I have designated Vice Admiral Meurer as my representative. He is ordered to leave at 2 P.M. this afternoon on board the cruiser Konigsberg from Wilhelmshafen to proceed to rendezvous to be determined upon in the North Sea. 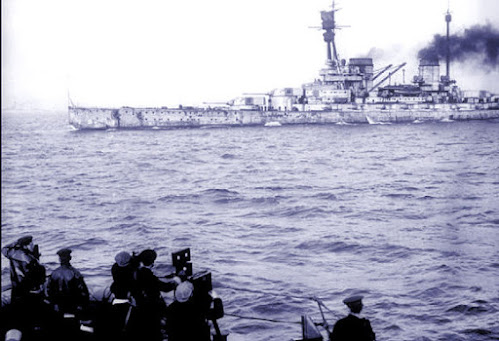 Read the full correspondence in which the intricate details of the massive and unprecedented surrender are worked out here: